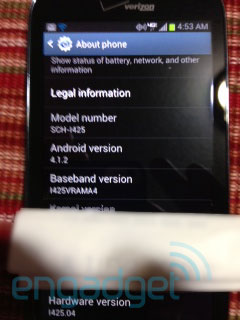 Earlier this week, we reported that a GLBenchmark entry had shown up for a new Samsung phone code-named “Godiva” with a model number of SCH-i425. Based on the model number, it seemed likely that it was a member of the Verizon Stratosphere family, even though the Stratosphere 2 just debuted in November.

Fast-forwarding to today and photos have just surfaced of the new Samsung smartphone.  While what we know about the phone is still limited, we do know it will run with a Snapdragon S4 chip. If you dig capacity and curves, than this phone will probably be calling your name.

It will run on Android 4.1.2 (confirmed by photo below), have a 720p display and appears to have NFC support within the back dust cover. The phone is set to drop on Verizon and does sport the Verizon branding in the photos.

This could very well be “Godiva”, but there’s a pretty big omission in the design here: there is no slide out QWERTY keyboard. Up until now, that’s been the big ‘calling card’ of the Stratosphere line.

For now, we can’t say for sure if this is the same phone that showed up in benchmarks or not, but it is likely. What do you think, does this phone seem appealing to you, with the limited information we have thus far?