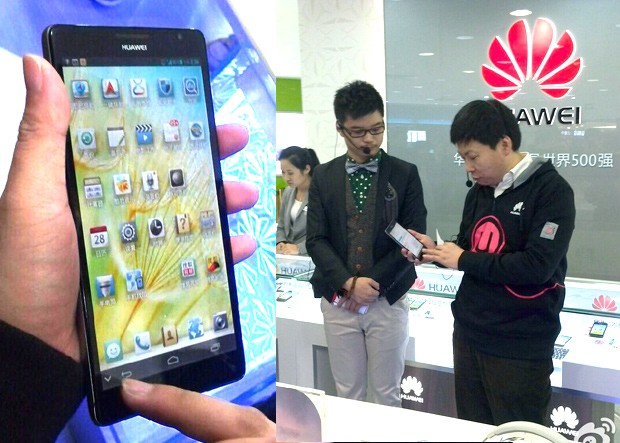 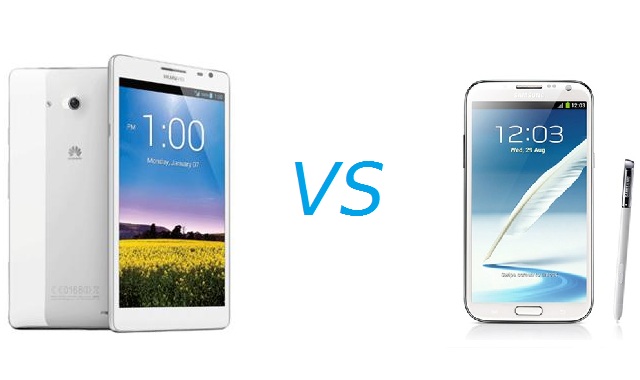 As expected, the Huawei Ascend Mate touched down at CES last week, bringing us a massive 6.1-inch phablet that is ready to face off against established players in the phablet space, namely Samsung and their Galaxy Note 2.

While a true “versus” article isn’t quite possible until we truly get our hands on the Ascend Mate for a proper review, we can certainly look at what we know so far to draw a few comparisons.

Who wins here? Honestly, depends on what you want. If bigger means better, Huawei wins.

If you are looking for the crisper and clearer display, the smaller 5.55-inch Note 2 display is going to look a little better and is therefore the winner.

I suppose you could certainly call it a “tie”.

In the camera department? You get an 8MP main shooter with LED flash, autofocus, HD video and still capture. There is also a 1.9MP secondary camera and 3100mAh battery.

As for the Huawei Ascend Mate?

The Ascend Mate delivers a 1.5GHz quad-core experience with its own Huawei chipset and runs on an unannounced GPU, all powered by a huge 4050mAh battery. You get 2 GB of RAM, 16GB on-board storage and micro-SD expansion as well. The cameras are an 8MP and 1.3MP secondary camera.

Both devices have pretty similar hardware. It is worth noting though that an AnTuTu benchmark score puts the Note 2 overall at a 13815, versus the much lower 9480. Keep in mind that benchmarks can very depending on the software used and that benchmarks don’t necessarily equate to a massively better “real world” experience.

Bottom line, the hardware in the Note 2 packs a bit more punch, but the Huawei Ascend Mate is no slouch and should probably work comparatively when it comes to using most apps and other purposes.

If we are declaring a winner here, it would likely be the Note 2. 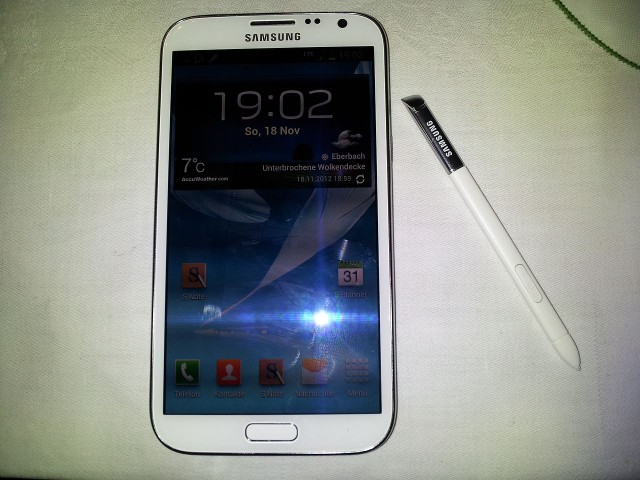 The Ascend Mate manages quite a slim design for such a monster device. It has a narrow bezel and is actually a rather attractive smartphone, at least in my opinion.

The Note 2 is also designed to be rather thin considering its screen size. The design is certainly “Samsung”. It has a look that isn’t too terribly different from other flagship Sammy devices, and is also quite a looker.

Honestly, preference is going to play a lot here. Some will like the Mate better, some prefer the way the Note 2 looks.

The stylus in the Note 2 is very capable and while everyone doesn’t use it, if you like the idea of the S-Pen, you are better served sticking to the Galaxy Note 2. For whatever reason, Huawei decided that the Ascend Mate didn’t need to offer a stylus.

Again, this might not matter to everyone– but if you like taking quick drawn notes, it could be a very big difference and the ultimate deciding factor in which to purchase down the road.

I’m not going to say much here since I haven’t had the opportunity to go hands-on with Hauwei’s customized skins. Both handsets come standard with Android 4.1.2 Jelly Bean and even though their skins have differences, the overall experience should be relatively similar.

There is a big question mark here. Huawei is a Chinese company and could certainly come out with aggressive price points when it finally arrives to your local market. That said, the Note 2 is also no longer “brand new” and will continue to drop in price.

The Huawei Ascend Mate might end up winning in the price/value category, but we don’t have enough information to say for sure.

In these kinds of “versus” articles, I tend to shy away from picking a winner, understanding that preference ultimately plays a big role in your selection. This is even more true with devices that aren’t officially released.

Still, if I had to be totally honest? The Samsung Note 2 would be my personal choice. Why? I think 5.5-inches is plenty big enough for me, I’ve used the S-Pen and think its a worthwhile difference. Additionally, I have an established opinion of the Samsung brand and haven’t really had enough time with Huawei products to form a real opinion about their quality.

That said, the Huawei Ascend Mate seems to perform pretty close to the Note 2, and if you want a bigger screen and don’t mind being without a stylus, it could be the perfect fit for you.

I would certainly pay attention to the Mate as it gets closer and may update this article when we have more “real world examples” to show off which is truly the better phone. In the meantime, they are both great choices from what we know so far about the Mate.

What do YOU think about the Huawei Ascend Mate versus the Samsung Galaxy Note 2? Do you think the bigger screen size is worth some of the other concessions you might have to make with the Mate?

Let us know what you think in the comments below! Additionally, check out Phone Arena’s spec list to see detailed side by side specs comparing these two beasts.