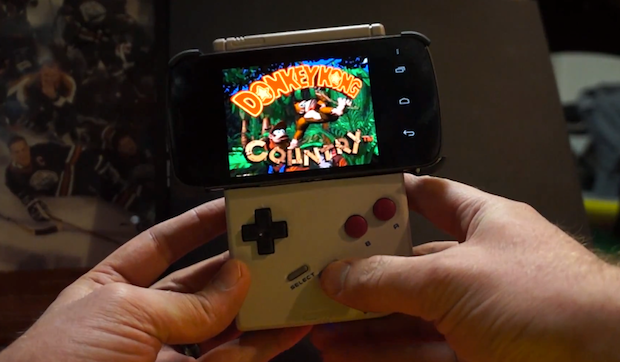 The younger crowd probably won’t see the point of this, but this could be awesome for those of us who killed endless days with our first handheld game system, the GameBoy.  Chad Boughton, missing the tactile response of those 2 simple buttons and direction pad decided to swap out the dot matrix display in his GameBoy for his Galaxy Nexus’ Super AMOLED display.

Chad first removed the GameBoy screen and trimmed the case so a GNex case could be flushly mounted to the rest of the GameBoy body.  His next challenge was to get the buttons to work wirelessly with the phone.  He trimmed up the GameBoy’s circuit board to make room for the inner workings of a Wii Remote which he connected to the buttons of the GameBoy.  After that he simply installed the Wii Controller IME app so the GameBoy would communicate with the Nexus.  Below you can see a video of this awesome mod in action as well as some explanation of the construction.

I really hope some company takes the reins of this and produces a consumer version of this for the masses, I know I’d buy one!