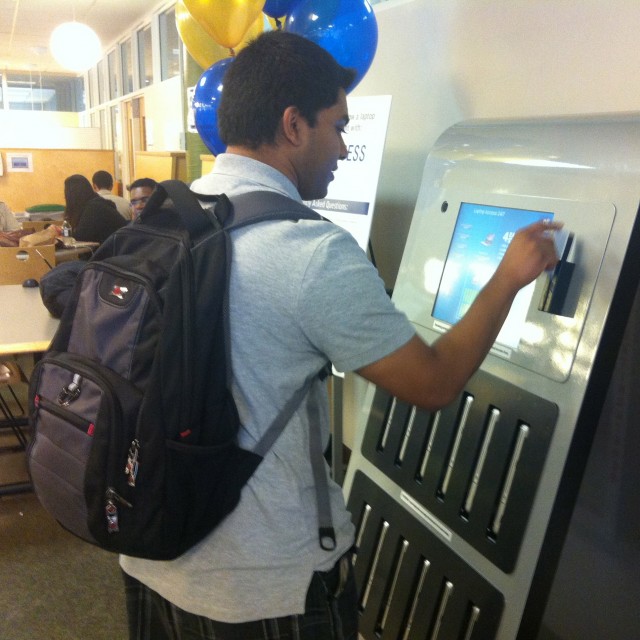 Drexel University in Philadelphia has started a new program that seems to be the beginnings of something very big.  They have installed a Kiosk style vending machine that dispenses Macbooks for use by Drexel faculty, staff and students.

The machine is the university’s attempt to prevent students from getting mugged while carrying around laptops.  Each machine holds 12 notebooks that can be “checked out” for free for 5 hours by swiping student ID cards.  There is a $5 late fee for overdue notebooks.  While the notebooks are checked in, they get a battery charge and the kiosk does a hard drive cleaning to prevent subsequent users from being able to access previous content.

Drexel’s media relations director, Niki Gianakaris said “We installed it in late December” “Students didn’t want to carry their laptops to the library late at night.”  I imagine the 12 Macbooks spend very little time in the Kiosk, Gianakaris said “This is obviously going to be very popular, we’ll evaluate their use and, depending on the results determine how many more we can install.”  Drexel is also considering a iPad machine as well.

Two other East Coast learning institutions are also trying to get the machines which were developed by Laptops Anytime out of Texas.

I don’t know about you, but I think this is the beginning of a new trend in schools and libraries.  Keep in mind that Drexel previously had laptops for borrowing behind counter at the library, a trend that many other colleges and universities are already adopting. Still, the idea of automating the process with vending machines is pretty cool. What do you think?