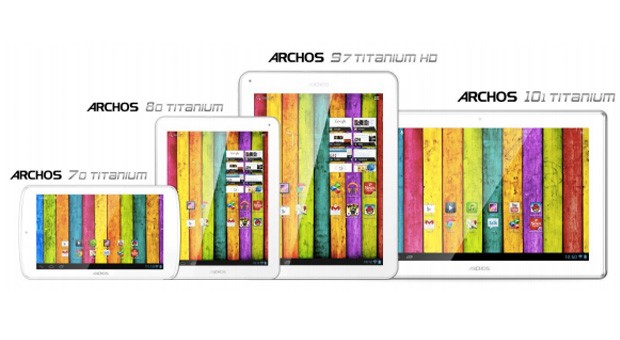 Archos might not be the most exciting tablet maker around, but it is one of the most affordable. The budget maker is constantly churning out new Android devices so the announcement of four new tablets at CES this year is less than surprising.

The new “Titanium” line is made up of four devices that all have IPS capacitive multi-touch displays with dual-core 1.6GHz CPUs and quad-core GPUs running on Android 4.1 Jelly Bean. The big difference in the line is the screen size, which starts at $119 for a 7-incher up to $199 for a 10.1-incher.

As you probably already guessed, there is no actual titanium involved in the line, the name instead refers to their “strong” specs considering their price tags.

A dual-core 1.6GHz Android tablet with a 10.1-inch screen for $200 certainly sounds impressive, but many times Archos tablets sound better on paper than what you actually get when you see and test them in person. Still, it’s hard to beat the low-pricing on this line up. For more details, check out the press release below.

The ARCHOS 97 titanium HD (9.7 inches), with a resolution up to 2048 x 1536 pixels is priced at 249€, $249 and £199, and aims to be an alternative to the new iPad for half the price.
ARCHOS will have the full Titanium range and the recently announced ARCHOS TV connect on display at CES until Friday, January 11th, so stop by now and get your hands-on demonstration – Central Hall, booth number 15322. www.archos.com