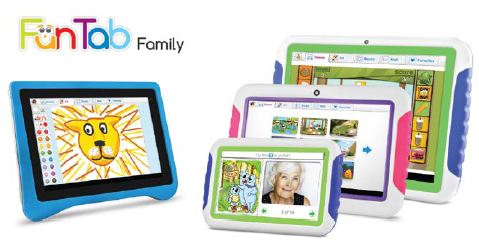 We’ve seen an increase in tablets aimed at younger audiences recently, and Ematic are currently showcasing four more Android pads to add to this range.

The four Android devices vary in size, giving you the choice to purchase something more suitable for your child and their smaller hands.

The largest of the bunch is the FunTab XL, a 9.7 inch tablet with a 1.2GHz processor and 16GB internal memory for just $150. The FunTab XL also has HDMI output capabilities and a camera on either side of the device.

For a younger child, a 9.7 inch screen is somewhat difficult to hold, especially with the large colorful bezels taking up a decent amount of space on the tablet, so it’s nice that Ematic are throwing in two versions of a 7 inch tablet. The FunTab and FunTab Pro have relatively similar specs and prices, for $120 you can bag yourself a 1GHz-powered device, whilst the $150 Pro version comes with a 1.2GHz processor and HDMI output, similarly to the FunTab XL.

Finally, Ematic have released an even smaller device in the range, and at 4.7 inches, it is more of a smartphone size than a phone, however for the really young ones the size is more than enough for their small hands to get hold of. The specs aren’t great; 1GB RAM, 4GB internal and a 1GHz processor, however for just $60, you can’t expect much better.

What’s important to note about Ematic is that although the devices come with Android 4.0 out of the box, their previous tablets have been limited because of their own software overlay, usually blocking out Google Play access and other standard Android features. The benefits of course are that your children can’t find their way to any content they shouldn’t, and everything available to the user is very child-friendly and easy to use.