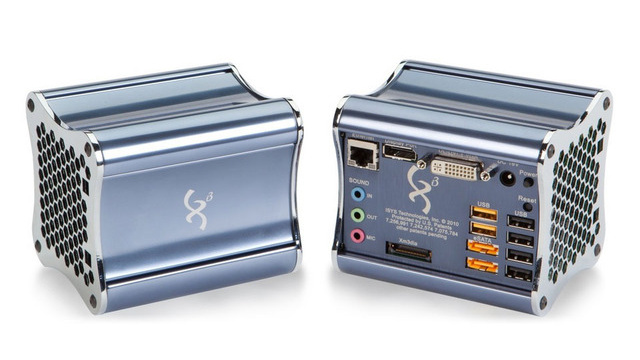 [CES 2013] Modular computing is here folks, and Xi3 is showing it off at CES with the introduction of their 7 Series modular computers.

There are two members to the line-up, the Xi3 5A and 7A. Both are ultra-small, fitting in a computer that is only 4-inches per side and manages to pull in just 20 watts. We don’t have a full set of specs for either, though we do know they currently run on the AMD R-Series APUs, which include integrated graphics with the AMD Trinity Series 32nm APU chipset.

This means quad-core computing up to 3.2GHz in a tiny package that is said to support up to 8GB of RAM and can output video as high as an impressive 4,096×2160.

So what is a modular computer anyhow? Basically, you take a motherboard and you split it into seperate parts. In the case of the Xi3 7 Series you have three boards in total– one for the processor and RAM, one for the power and a final one for the inputs and outputs.

The end result is a computer that is very tinker-friendly and can be replaced one section at a time, allowing consumers to swipe out obsolete parts of the package along the way without completely getting a new board. At the moment, Xi3 is aiming this effort at the embedded market and cloud computing market, but it could certainly find its way into the homes of many gamers in the not too distant future thanks to steam.

What’s this have to do with Valve and their Steam software? Actually, Xi3 has announced that they are working on a new project funded by Valve, though they aren’t giving us any specifics at this point.

What we do know is that the project is said to be based on the 7 Series that we highlighted above, though it will likely have a different overall design than what we are seeing now.
The project’s name is said to be “Piston”, interestingly enough.

With Valve’s CEO Gabe Newell dropping hints about its own game system in the past, this could very well be the beginning work on the so-called Steam Box. Whether this will run Windows– which Valve has complained openly about– or Linux remains a mystery.

Heck, everything about the Piston project is shrouded in clouds at the moment. What do you think of the Series 7? Interested? Do you think this modular computer is in fact the basis of Valve’s long-rumored SteamBox?