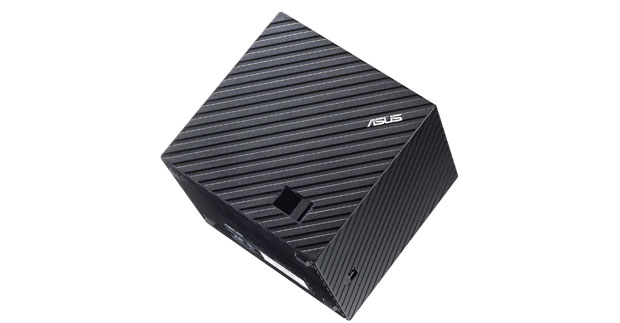 Thanks to various leaks, today’s announcement of the Asus Qube Google TV device might not have been the surprise they were looking for, but the home-media system is interesting nonetheless.

Earlier this week it was thought that the Asus Qube could join the Nexus Orb and become a Nexus device, but just one look at the ‘cube’ inspired user-interface can tell us that this is far from a vanilla Google TV install.

As well as the funky rotating “Qube” UI, the Qube boasts 50GB of cloud storage and access to over 100,000 movies and TV shows though Youtube, Netflix and Amazon Instant video integration. No word on what the guts of the Qube are hiding, but we imagine it won’t be long before we get to see the first tear-downs hit the net.

Instantly add Google TV to your HDTV with the ASUS Qube. Qube with Google TV offers both motion control and voice search that integrates Google Play, Chrome™, YouTube™in one compact device. With access to over 100,000 movies and TV shows* from Netflix and Amazon Instant Video, plus numerous apps, videos and games from Google Play, ASUS Qubewith Google TV is the perfect media content device.

ASUS has developed the unique Qube interface, which displays functions via a rotating on-screen cube shape. The advanced remote control supports motion sensing for gaming and other applications. Customers can also control Qube with Google TV from their Android smartphones and tablets using the Mobile Remote app, available through Google Play. ASUS includes 50GB of WebStorage cloud space with every Qube with Google TV.