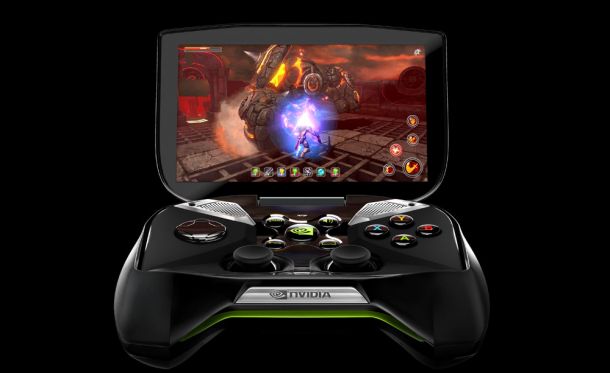 [CES 2013] The world has been screaming for a decent Android gaming setup for a long time. With kickstarted projects like the Ouya and the recent GameStick reaching quick success, it’s clear that Android gaming is something a lot of people want to see more of.

Now an even bigger name is getting involved in the Android console game: NVIDIA.

NVIDIA has just shared the first details of their new Project Shield, a portable Android gaming system that comes with a built-in controller and the full Android experience straight out of the box. The new piece of kit will include NVIDIA’s new Tegra 4 processor, apparently boosting the performance six-fold compared to NVIDIA’s Tegra 3 chipset.

On the outside, the device has a controller with physical buttons, attached to a flip-up 5 inch screen which displays images at HD resolution of 720p. The device will also have Micro-USB, HDMI output and a Micro SD slot for extra storage space, as well as access to the full Android offering without any restrictions.

The new Project Shield is also capable of outputting real-time HD onto a 4K display without any lag or detriment to quality.

NVIDIA was also smart enough to notice the current lack of hardcore gaming options available on the OS. In order to make it a worthy competitor to other handhelds like the PS Vita they have developed software that allows the Project Shield to stream and play any PC game via a connected WiFi network.

The bad news is that this only works when connected to your local network, so no playing your favorite PC games while in a taxi or elsewhere on the go.

NVIDIA has plans to ship the Android handheld by the 2nd quarter of this year, although pricing details are currently unknown.

What are your opinions on Project Shield? Excited or not?