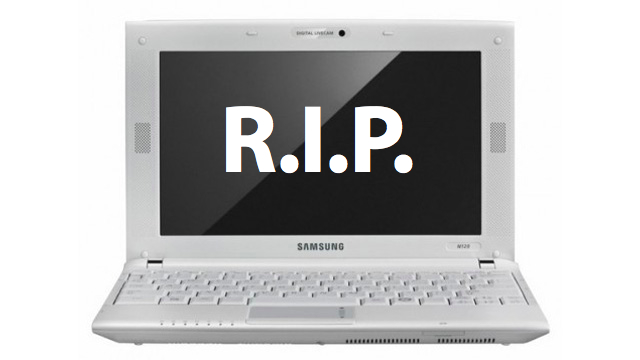 This probably doesn’t come as a surprise to any, but netbooks are officially goners now. This has been a long-time coming. As ultrabooks and tablets have eaten into netbook marketshare, Asus and Acer remained the only two brands that were keeping the netbook market alive.

Now Asus and Acer confirm that 2013 will be the last year, with no plans to make any further models. The companies will instead focus on convertibles, hybrids, ultrabooks and tablets.

The ending of an era. Netbooks gained popularity as quickly as they fell. So what happened? Probably the biggest reasons for the end of netbooks is that profit margins were never great for manufacturers when it came to netbooks, whereas tablets and other mobile computing devices have proven much more lucrative. Demand has also gone done.

Sure, some niche users need a highly-portable device with a real keyboard, but many consumers have moved from netbooks to tablets. So what about those that want a smaller notebook device and don’t want to pay much for it?

At this point, your best bet is probably to look towards Chromebooks, if you have a way to provide an always-on connection and don’t mind cloud-based apps. There is also the possibility of using a low-end notebook, but they are generally quite a bit bulkier than netbooks ever were.

Will you miss netbooks? Do you still use one, or have you moved on to other devices like tablets instead?