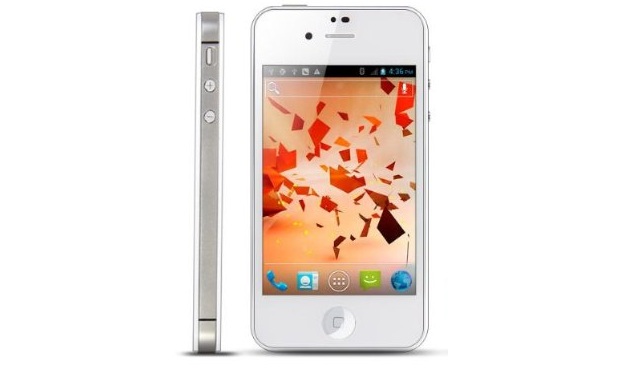 Perhaps you are in love with the Apple iPhone form factor, but you’d prefer to have things running on Android 4.0 Ice Cream Sandwich. If that’s the case, this budget unlocked smartphone could be just the ticket.

To be fair, the listed manufacturer for this Android 4.0 iPhone Knockoff is simply “China,” so it may not give you a lot of confidence in terms of user support. That said, the specs on paper are sounding pretty decent, especially for the price. It’s a quad-band GSM smartphone with a 3.5-inch HVGA capacitive touchscreen. It runs on ICS, has 4GB of storage, 512MB RAM, and a 1600mAh battery. There’s also WiFi, GPS, and dual cameras.

One of the most notable features, though, is that it has dual SIM card slots, allowing you to handle two separate phone numbers through the same smartphone. And yes, it bears a striking resemblance to the iPhone 4/4S, complete with that characteristic home button beneath the touchscreen. You’ll certainly fool more than a few casual passers-by.

The real kicker, though, is the price. It’s selling for just $141.89, including free super saver shipping from Amazon. That’s unlocked and unsubsidized. It even has an overall customer rating of 4/5 stars with 77 customer reviews on Amazon. That’s got to add some confidence, right?