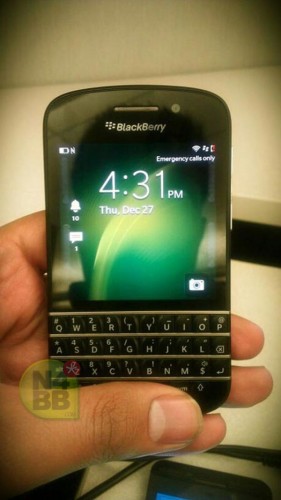 While I’m personally more excited in Blackberry’s all-touch Z10 handset, and its impressive predictive virtual keyboard, there are certainly many RIM Blackberry fans that are still very much into their physical keyboards.

If you are looking for the best of both worlds with touch and a physical keyboard, that’s where the Blackberry X10 comes in.

The X10 not only has a physical keyboard, but it also has touch technology on the display. While Blackberry 7 worked fine without touch, BB10 is designed as a touch-centric OS so having a display that works in this manner on all devices is important.

The picture above comes from the latest leak via N4BB. You’ll notice that although the X10 is similar to old-school Blackberry devices, it still manages a style that merges the old with the new. Gone is the center trackpad and other buttons associated with Blackberry devices.

This time around, we get a device that is screen, and keyboard. Not a lot of other buttons to get in the way.

Again, I’m more interested in the virtual keyboard, but I have to admit that the X10 is shaping up to be an interesting enough looking device for those that don’t mind a smaller screen and would rather have physical keys for typing.

Are you at all interested in what RIM has to offer with BB10? If so, which device are you more interested in, the Z10 or the X10?