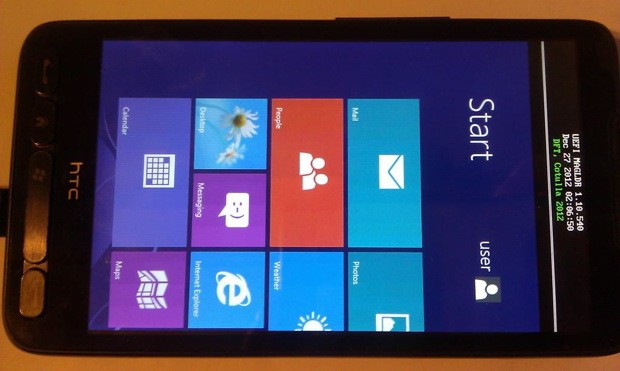 When the HTC HD2 originally hit the market it was just an ordinary Windows Mobile 6.5 handset, nothing special or worth gawking at. Now, years later? The HD2 has continued to dodge the Grim Reaper by continuing to live on as a hackable device that allows would-be modders to push modern software onto the device.

The HTC HD2 not only moved past Windows Mobile 6.5 over to Windows Phone 7 via hacking efforts, it was also recently shown off by Cotulla running Windows Phone 8. While the HTC HD2 probably doesn’t run these modern operating systems blazingly fast, the fact that it can run them at all is impressive.

Not impressed with the HD2 running both Windows Phone 7 and Windows Phone 8? What about Windows RT, the ARM-version of Windows 8? That’s right, Cotulla has now returned with a new mod that allows Windows RT to be installed onto the HD2.

Considering RT is meant for big screens, this probably doesn’t run or look all that wonderful, but it is still pretty cool.

For those that are hoping for something less Microsoft-ish, there have also been hacking efforts in the past that put Android onto the device as well.

So what’s the secret to the HD2’s hacking success? Part of it is that it managed to lure in some very dedicated and talented hackers. The second reason is that its Qualcomm chip and the rest of the hardware is all very hack-friendly and highly compatible with a vast array of operating systems it seems.

Do you have an old HD2 laying around? Have you tried any similar projects to give the device renewed life?