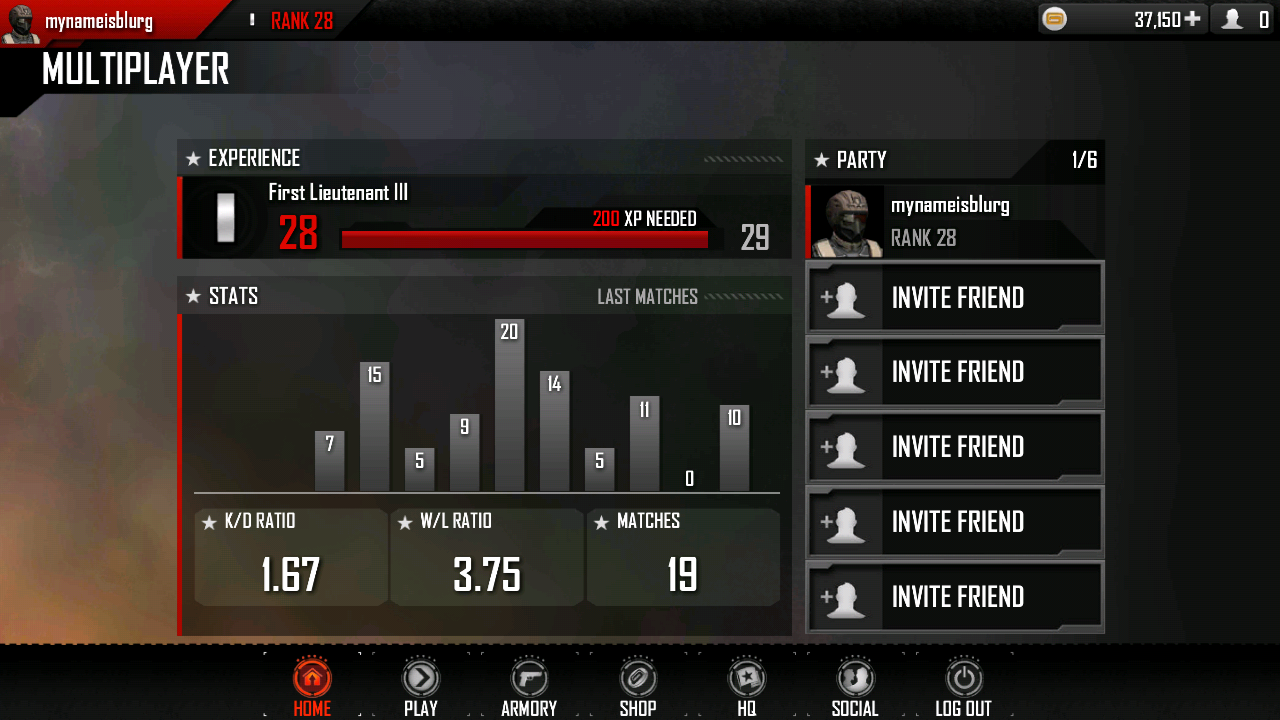 Although this game was reviewed on Android, other versions of the game will be very similar to what is described below.

Gameloft has finally released Modern Combat 4: Zero Hour, and at a first glance, it looks stunning. The game feels very polished right from the UI and menu navigation all the way to the great multiplayer progression and the singleplayer campaign

The touchscreen has its restrictions when playing fast action games, and the current overlay used by most first person shooters is usable, but no one has quite yet managed to invent a decent control system that uses the functionality of the touch screen to its advantage instead of just popping overlay control buttons on top of the screen.

There are a variety of buttons on Modern Combat 4 and for the most part they’ve been placed in all of the right places. 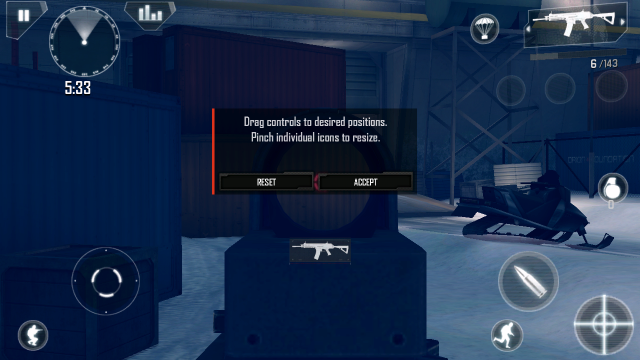 Buttons on the right side control most of the things you’ll need to play, such as sprint, zoom, and fire, whilst on the left side you have a radar and a movement stick. This layout has become the standard for most shooting games on the mobile platform, however, if you aren’t happy with it, the overlay can be edited in the menu, You can move and resize all of the overlay buttons to your liking, making it perfect for your own use, especially handy when you have a screen size that doesn’t work with the default set up.

Although in most cases, the majority of attention towards first person shooters is on the multiplayer aspects of the game, it’s rare that you find an FPS game without some sort of single player campaign. The campaign within Modern Combat 4 features the generic scenarios we’d expect from most modern shooters today. This is not to say it’s bad though, because although the story isn’t exactly new in terms of plotline, and there’s nothing within the campaign that makes it stand out from anything else, there’s still a decent amount of content within it, and it plays out very smoothly. 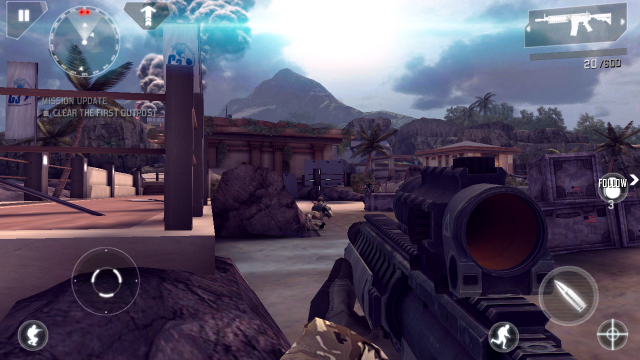 An interesting aspect of the campaign is the continuous switching back and forth between the different characters. The first mission starts with you playing as the good guys, but the second mission lets you play as the terrorists, and this pattern continues throughout the twelve missions available within the campaign.

At first, the average combat scenario was fun, and it was truly impressive to take in this level of content on a mobile device, and Gameloft  have boldly set a new standard for smartphone gaming, however, when comparing it with console and PC shooters, after a few hours of play most of the average combat scenes become dull and quite repetitive. The AI isn’t great, and you can always stick your head behind cover and take a lengthy breather whenever you feel it’s necessary. 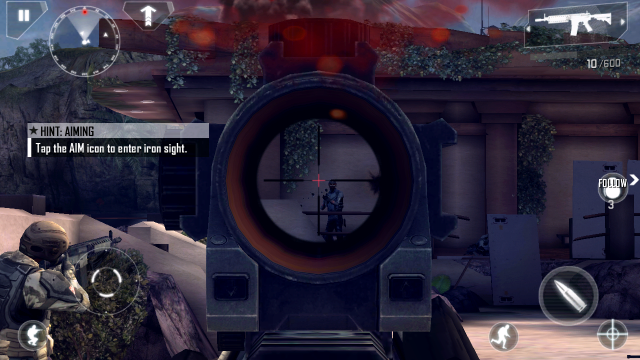 Luckily, there are different scenes within the campaign that mix up the standard firefights, including fast-paced shootouts whilst on the back of a vehicle, interesting operations that involve remote control robots, and other objective-based scenarios.

The story has also been very well narrated, and the voice acting for the characters is superb. Of course the story doesn’t deserve any awards in regards to originality, but it has been portrayed very well, and Gameloft have done a great job to immerse you within the storyline. The switching between both sides of the story opens up opportunities for the campaign as well, and Modern Combat 4 uses this feature well. 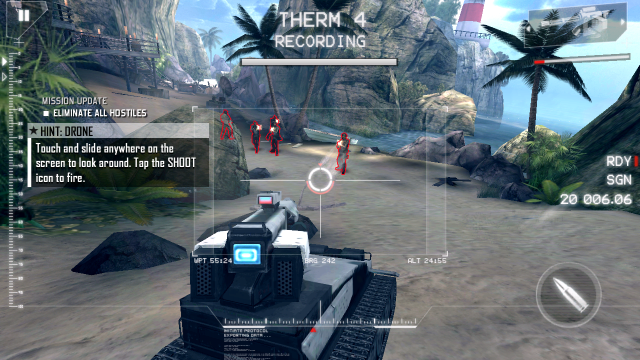 The multiplayer in Modern Combat 4 is outstanding. Never before have we seen such great multiplayer gaming on a mobile device. The gameplay may mimic a lot from console gaming, but what’s important to remember is that this isn’t a console game, and right now, there isn’t any alternative on the market that lives up to Gameloft’s new game.

When you first enter the multiplayer menu after logging into your Gameloft Live account, you’ll be taken to a screen with three different multiplayer lobbies, and a row of options down the bottom. Two of these lobbies are dedicated to custom games. You can view all the current custom games playing, or create your own. This is perfect for those wanting to play with friends, or those who want to have more control over the levels and game modes that they play, but playing in custom won’t reward players with XP or currency to upgrade equipment. 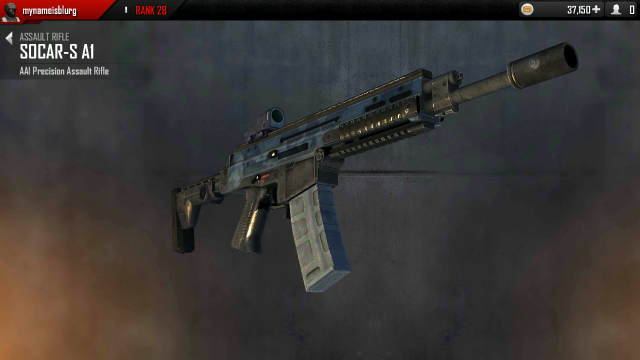 The ranked games will though, and they can be accessed through the ranked lobby. You can then choose the game mode you wish to play and you’ll be joined up with a game already in progress.

There are plenty of game modes in Modern Combat 4, which gives players hours of play before becoming bored. None of them are new concepts, but these game modes definitely help drive the core multiplayer experience. Games like Zone Control and Capture the Flag offer more objective-based gameplay, whilst games like VIP, Battle and Team Battle mimic the classic frag-fest. 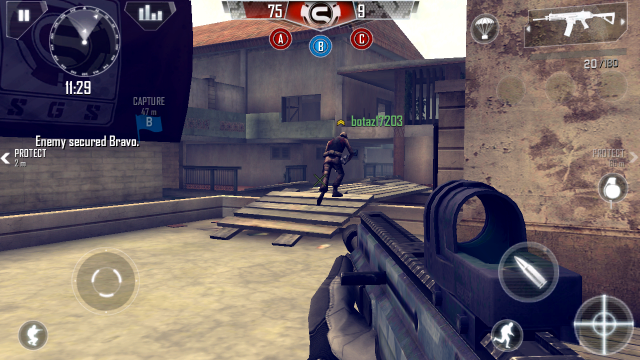 There are a few maps to play in, but the choice isn’t that big, and after a few hours play you’ll have mastered most of the maps and mapped out the layout of them in your head. It’d be nice if Gameloft added some more maps in the future, but right now it’s hard to tell if this will happen or not.

It’s also super easy to add friends in Modern Combat 4, and once you have a group of friends, you can quickly invite them to your party to play games together. The grouping system works really well, and you can also compare stats between you, your friends and other players within the social section.

The EXP and currency rewarded for completing the game is very generous, and you’ll get decent bonuses for winning matches, getting headshots and completing challenges found within the menu.

Although EXP only goes to your rank, ranking up will unlock new perks to purchase, and obviously having a high rank is a pretty important status symbol. 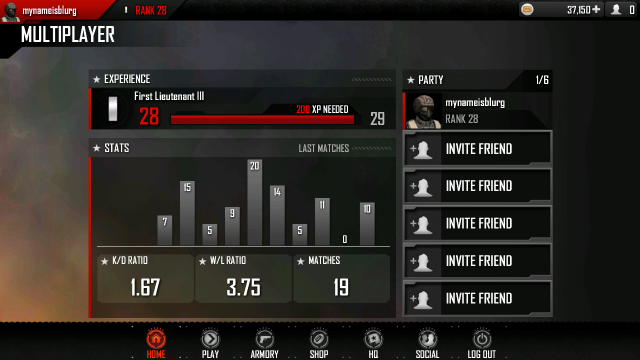 With your currency earnt in-game, you can purchase new weapons, perks, loadouts and attachments for your weapons. The menu is super easy to navigate and it’s been displayed really well. When choosing a weapon you can view it in a 3D theatre and rotate it around to have a decent look at it. You can then attach scopes, stocks and muzzles to your guns and your stats will adjust accordingly.

As well as the great weapon customization, a lot of work can be done to your perks, and finding a decent combination of perks and a well-equipped loadout can really help to benefit your own playstyle. 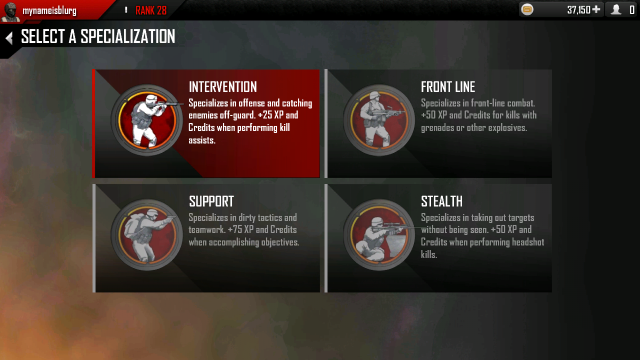 Multiplayer as it is on Modern Combat 4 is the best of the best right now, and it’s definitely got a lot to boast about. Currently there aren’t as many players online as you may like, and it is at times difficult to find a game session on ranked matches, and occasionally there are a few connection issues when logging into the game. However, it’s nothing like the connection problems in Modern Combat 3, and earnt EXP and currency will stay in your account after finishing a game.