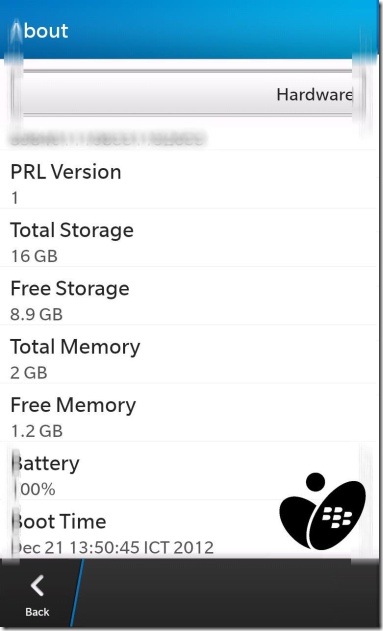 While RIM devices have a premium and “business-like” design to them, when it comes to modern features and operating systems, the Blackberry line has certainly fallen behind. It looks like Blackberry 10 is set to change the game, however.

We’ve already seen pictures of BB10 and even the upcoming Blackberry L-Series, which is now known as the Blackberry Z10. What we don’t fully know is what kind of specs we’ll find in upcoming hardware such as the Z10.

While much of the specs remain a mystery, we now have a screenshot indicating that the Z10 will have 2GB of RAM. For most high-end Android devices 2GB is starting to become standard, but it was originally believed that the BB10-running L-Series would have just 1GB.

Its hard to say what the processor will be with the Z10, but with 2GB of RAM onboard, here is to hoping that we get a quad-core processor to go with. Are you excited for Blackberry 10 and the next-generation RIM devices or not?