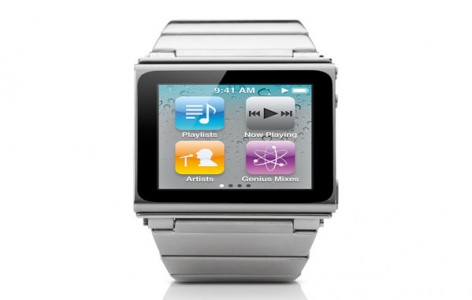 Until the most recent update to the iPod Nano, one of the coolest things about the little iDevice was that it was very easy to turn the phone into a capable smartwatch.

Through the use of 3rd party watch straps, users would slap the music players onto their writs and would use the built-in clock app to make it work like a watch. There were even a few different clock skins for the Nano.

While the days of using the Nano as a watch are over, a new rumor claims that Apple might be working on an official smartwatch of their own. This space is continuing to increase with competition and interest, with projects like the Pebble smart watch coming to mind.

This is an area where Apple could certainly establish itself as a niche device for fans of their products. The claim is that Intel is developing this watch for Apple, interestingly enough.

The rumor suggests the watch will feature a 1.5-inch OLED display with ITO coated glass, but not much more is known about its specs or what kind of features it could bring to the table.

If this rumor has any true to it, it is more than likely the device would also work nice with syncing to other iDevices like the iPhone.

Though an Apple smartwatch doesn’t seem like that far of a stretch, keep in mind this is just a rumor and shouldn’t be taken too seriously until we have more concrete evidence.

Apple device rumors arrive all the time and yet never truly materialize as real products– we still regularly hear claims about a Smart TV from Apple, after all.

Would you be interested in purchasing an Apple smartwatch down the road if this is true?