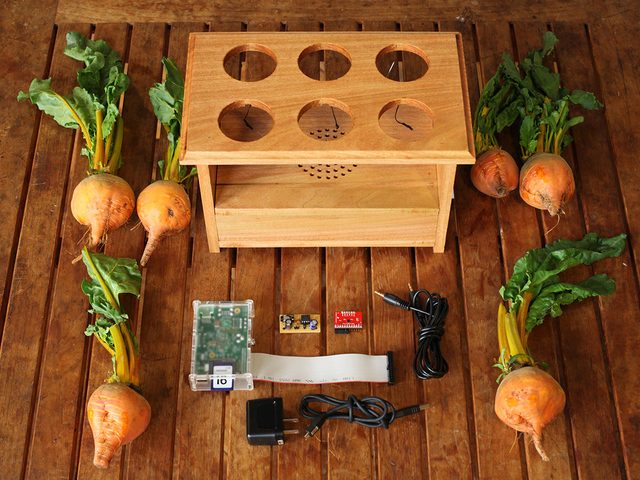 Scott Garner has created something I’m sure none of us ever thought we would see, drums made of beets. He calls this creation the aptly named BeetBox.  The drums use one of the credit card sized Raspberry Pi Computers as well as capacitive touch sensors and an amplifier to make each of the beets create a sound as they are touched.

“BeetBox is primarily an exploration of perspective and expectations”, designer Scott Garner said.  “I’m particularly interested in creating complex technical interactions in which the technology is invisible – both in the sense that the interaction is extremely simple and in the literal sense that no electronic components can be seen.”

The way the BeetBox system works is by using the capacitive sensor to record the input signal (the fingers touching the beets), after which a Python script loaded onto the Raspberry Pi triggers a drum noise for each input through the amplifier into a speaker mounted on the top of the box.

The BeetBox was mainly built for a course project and not as a sellable item, but the future possibilities of this technology are endless, with the possibility to make almost anything into a midi controller of such.  Is it possible that we may even see a system like this making drum machines obsolete– okay, probably not.  While I don’t think it will replace current technology, I can definitely see it being added into the mix of equipment that is used, especially considering the “cool factor” involved here..

Click the video below to see people playing the BeetBox:

What are some applications that you can think of for this technology, and do you see it being developed further in the future?