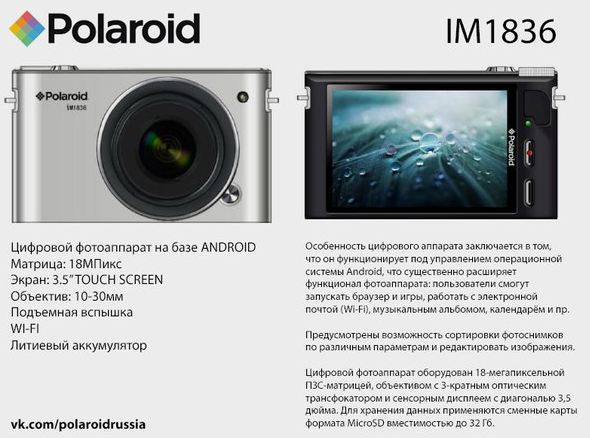 It seems that all the camera manufacturers are considering the implementation of smartphone operating systems in their pocket shooters, and Polaroid is no exception. The latest rumor has a new 18MP camera coming down the pipes that will be powered by Android 4.0 Ice Cream Sandwich. And it’s doing the interchangeable lens thing.

This isn’t Polaroid’s first foray into this arena. You might remember the Polaroid SC1630 from earlier this year, but the leaked Polaroid IM1836 is supposed to take it to a new level. Rather than simply competing against point-and-shoots, it’ll tackle the likes of the Sony NEX series, the micro four-thirds format from Panasonic and Olympus, and other compact interchangeable lens systems.

The rumored specs include an 18.1-megapixel sensor, 3.5-inch touchscreen, Android 4.0, pop-up flash, Wi-Fi, HDMI, and a microSD slot. Some people say that it bears a striking resemblance to the Nikon 1 J2, so we might assume that it uses the same CX image sensor (13.2 x 8.8mm). That’s been one of the knocks against the Nikon 1 series in that its image sensor is far smaller than micro four-thirds (17.3 x 13mm) and even smaller than the APS-C sensor used on the Sony NEX series.

Even so, simply going with a mirrorless interchangeable lens format will give the Polaroid Android camera a leg up against other Android cameras like the Samsung Galaxy Camera and the Nikon S800c. Soon, in-camera editing, cellular connectivity, and social sharing will become the norm rather than unique selling points.