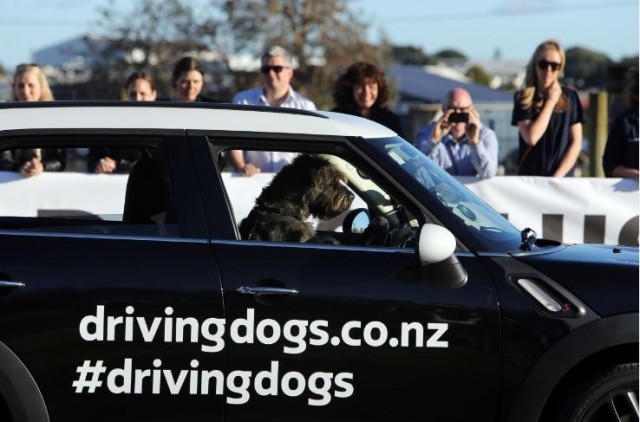 Everyday lost and abandoned dogs are left in shelters, never being adopted and many of which end up put to sleep.   The Auckland, New Zealand SPCA decided to do something about it.  They wanted to raise public awareness for the 50 – 100 dogs it has in its shelter every week.  Anyone with an obedient dog knows how intelligent they are and how able they are to be trained.

So the NZ SPCA teamed up with the automaker MINI to make a commercial that will change the way people view the abilities of canines.  MINI’s NZ brand manager, Simonne Mearns, asked his ad agency DraftFCB to work with the SPCA on the campaign.  DraftFCB had big ideas and came up with something that no one would have expected to be possible.

Three dogs — Porter, Ginny and Monty — worked with four different trainers for over two months to become the world’s first driving dogs.  The MINI Countryman vehicle was specially modified with accelerator and brake pedals moved so the dogs could reach them, and an easy activate ignition switch.  They also made “paw friendly” controls and handles for the steering wheel.

Porter excelled and was featured in the Youtube video “Meet Porter.  The World’s First Driving Dog”.  The video shows Porter sitting in the seat, starting the vehicle, pulling off and even negotiating a corner.  It has received over 6 million views on Youtube.

While I don’t think we will see personal canine chauffeurs anytime soon, it did its job to raise awareness of how smart these dogs actually are.  I’d like to note though, Porter did not use the proper 10 and 2 hand position on the steering wheel.  Maybe a bit of remedial training is needed.