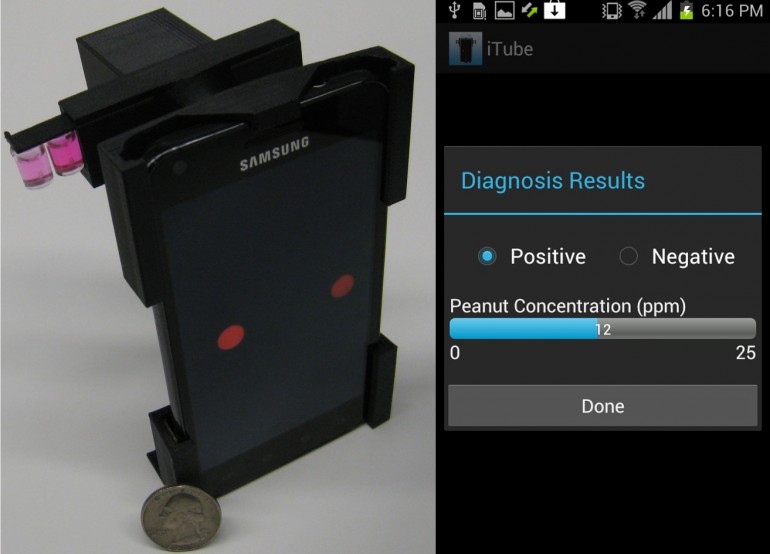 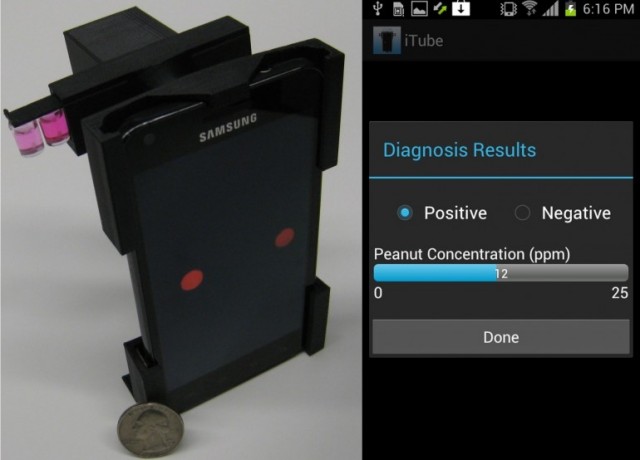 If you or your child have a food allergy, it can be very frightening and sometimes deadly.  While there are labeling laws, the average consumer has no way to know if there really is any deadly ingredients in their food.  Even residual materials can be enough to cause very serious problems.  So the consumer is forced to just trust that the companies they are purchasing their food from are following the laws and being careful to not cross contaminate.  That is until now.

At the UCLA Henry Samueli School of Engineering and Applied Science, they have developed a device they call the iTube.  Associate professor Aydogan Ozcan was tasked as the team leader.  This is a groundbreaking system that turns your average smartphone into an allergen sensor.  Prior to this technology, detectors were large and very complex.  The iTube is a system that the average person can use, and lives will be saved.

The iTube weighs in at only 1.41 oz and attaches directly to your smartphone and detects with lab level sensitivities.  The device has the ability to detect allergens such as gluten, eggs, and various types of nuts.

While this system does not provide instant results and there is a series of processes that have to be done, it only takes 20 minutes to get a for sure answer if something is safe or not.

The iTube uses a colorimetric assay process to detect allergens.  It works, simply put, by coloring allergens and measuring the concentration of the color with your smartphone’s camera via an app on the device.  To analyze a sample, it must be ground up and mixed in hot water.  You place that in a small test tube along with an extraction solvent.  After the mixture is allowed to settle for several minutes a series of chemical reagents is mixed in.  A pair of LEDs light the tube and the app compares the sample and control and provides a result in parts per million.

The test results are time stamped and uploaded to iTube servers where you can keep track of a personalized allergy database for future reference.

“We envision that this cell phone–based allergen testing platform could be very valuable, especially for parents, as well as for schools, restaurants and other public settings,” Ozcan said. “Once successfully deployed in these settings, the big amount of data – as a function of both location and time – that this platform will continuously generate would indeed be priceless for consumers, food manufacturers, policymakers and researchers, among others.”

The fact that these consumer level technologies are being produced will be a relief for parents of children with a deadly allergy.  While we have no word on the price of this system yet, it will be considerably less than the available systems now.  When it hits the shelf, I’m sure it will fill a need in the marketplace for consumer level testing.

Do you or a family member suffer from a deadly food allergy?  Would you want this to be able to test your food?