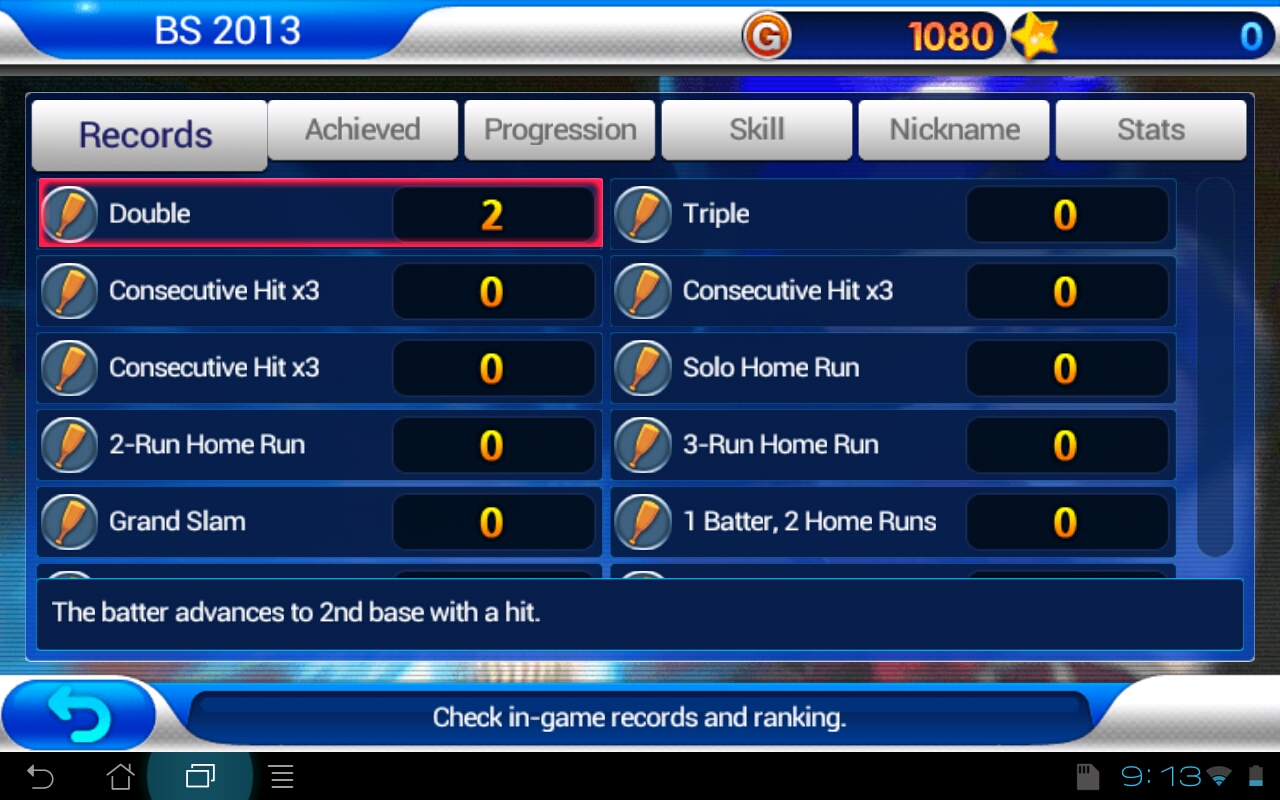 Baseball Superstars 2013 is a sports game with an RPG mentality. It’s become quite the norm for Gamevil to put in extensive character progression within their games, and this is no different with Baseball Superstars 2013. Although the game is perhaps not as action-orientated as other baseball games currently on the market, Baseball Superstars 13’ still has a great mixture of gameplay mechanics to keep things from getting too dull and ordinary.

On the menu you can access standard settings such as sound options and background music, as well as purchase in-game coins to be spent within the game, and view your gameplay stats and progress.

Gamevil have put in a lot of behind-the-scenes information, and a fair amount of this can be seen on the records tab. Things such as achievements, skill titles, and total playtime can be found here. Most of the details are there only for show, but it’s nice to evaluate your game progress from time to time. 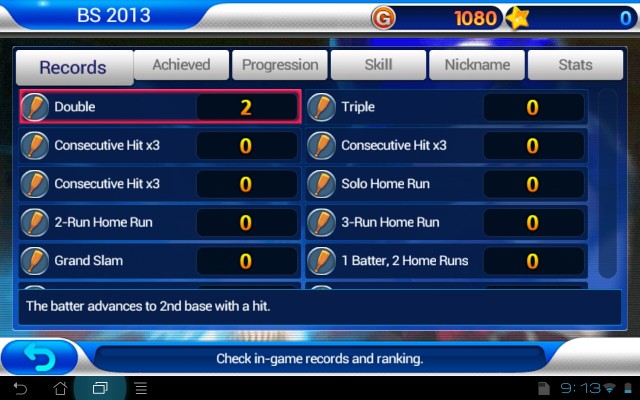 You can also edit each team and change the name of each player in each team, as well as change the colors of the clothes they wear. Once again, nothing game changing here, but it’s nice to have the ability to change your team to give it its own personality.

Superstars Baseball is split into two separate game modes, the first being batter mode, which as the name suggests, lets you play as the batter.

Success with the batter is very much down to the players’ timing, and missing or hitting that ball really does change the outcome of the match.

When playing as the batter, the pitcher will throw the ball towards your character, and you must swing the bat at the right time to land a hit on the ball. The ball usually centers towards a grid of nine squares placed in the batters swing reach. It’s difficult to predict the outcome of the pitcher’s throw, but after a while of playing, you’ll be able to pick up on the pitcher’s animations, which hint at how the ball will reach your character. 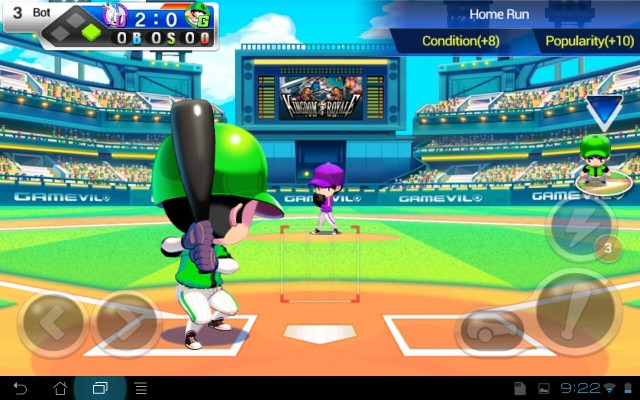 For those with little experience with baseball games, Superstars Baseball won’t be great, and there aren’t really any solid tutorials teaching the player on when to swing the bat. However, practice makes perfect, and luckily losing a game isn’t as detrimental as it would be in other sports games.

When batting, you’ll also be able to move left and right slightly which helps in reaching balls that have curled in a direction otherwise unreachable.

Your pitcher will play in a completely separate campaign to that of your batter, meaning you’ll have to start fresh with a new team and no extra character stats or abilities. This can be quite frustrating when you want to play between both modes frequently and would rather have the option to keep stats throughout both modes.

However, pitcher mode does add an extra layer of gameplay to Baseball Superstars, so it’s nice that we have it there at all.

When pitching, you can choose between a few different types of pitch, and then position your aim within the 9-square grid mentioned before. After that, pressing the throw button will then make your pitcher throw the ball. A small circle will start to close in on the aiming reticle, and pressing for a second time will make your batter release the ball. I’ve noticed that releasing the ball as soon as possible makes the ball reach the grid in a place unpredicted by the batter, and for the most part, playing against AI seems a little too easy when using this tactic. 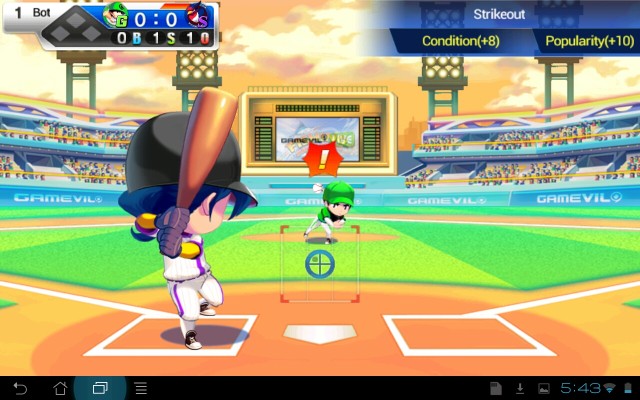 Leveling up, extra goals, and items

Although the main game revolves around the gameplay within each match, a lot of work goes before and after these matches. There are a group of buildings accessible from the main hub before playing a game. Each building has its own use and visiting each place often will help your gameplay greatly.

After completing a match, you’ll get gold coins and stars. These can be spent on items within the store. The items in the store range from extra helmets and bats, to crazy and hilarious costumes. There’s a whole lot to purchase within the store, and there’s enough there to make your character look unique. 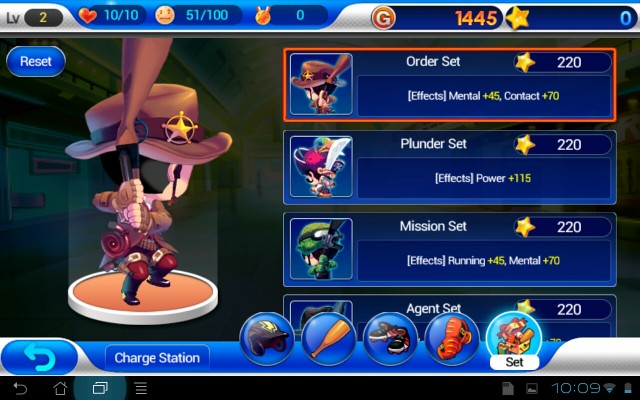 All of the items in the store also add buffs to your stats, giving you better performance within the game.

A cheaper alternative to boosting your stats is to visit the upgrade building where you can spend your stars to improve your character’s stats. You’ll also be able to improve the rest of your team, giving you an edge over your opponents. Stat boosts here are usually cheaper than those at the store, but won’t give you any cosmetic changes in your character. 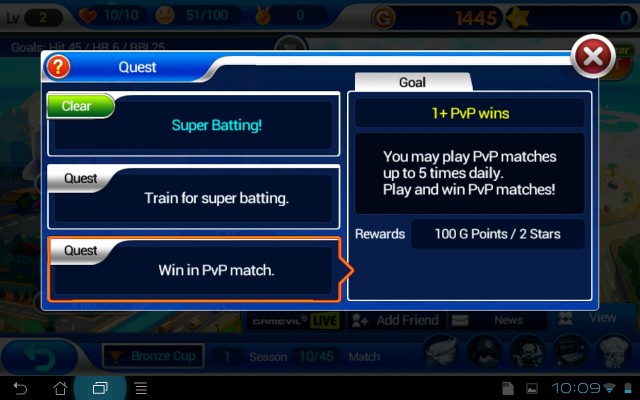 If you’re getting bored of playing through matches, the challenge area will give you more opportunities to earn stars and gold coins by completing certain criteria set out. They’ll also be surprise challenges to complete within each match which will help to improve your standing within the league.