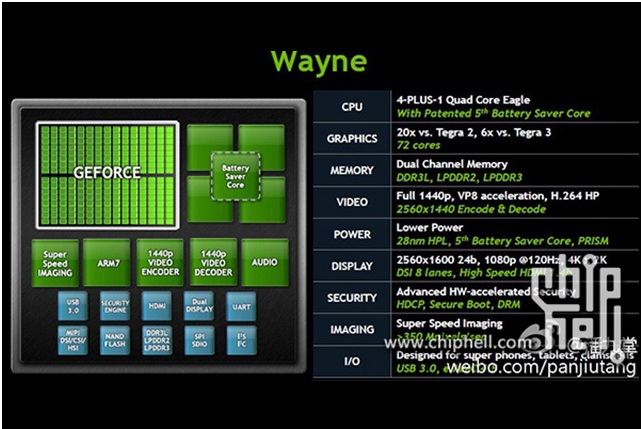 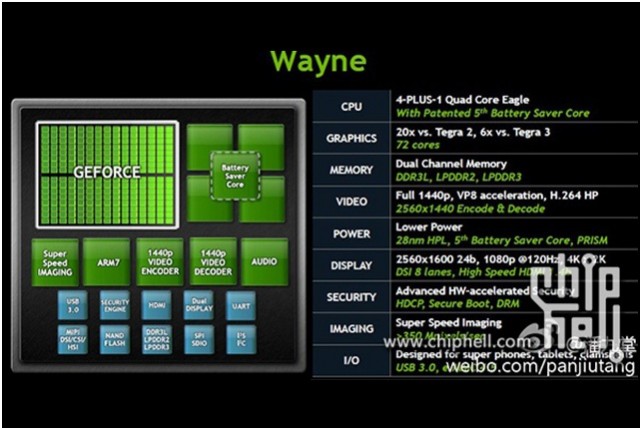 It seems that the next-generation Tegra 4 processor specs have now been leaked to the net. Codenamed Wayne, the newest smartphone and tablet processor looks to be rather impressive.

From what we are hearing, it is likely based on Cortex-A15 and is described as a 4-PLUS-1 Quad Core Eagle. Even more impressively, if this rumor turns out to be true the Tegra 4 will feature a 72-core GPU setup that makes its graphical abilities six times improved over the current-gen Tegra chips.

With such power behind it, you’d think it would also be a battery hog. Actually, with its 28nm manufacturing process it is said to be an improvement when it comes to battery and power efficiency.

The slide information seen in the image above also shows the chip has support for USB 3.0, 4k video playback and resolutions up to 2560 x 1440. There is no mention of integrated LTE, though.

Keep in mind that this is an unconfirmed leak and should be taken with a healthy dose of skepticism. The Tegra 4 sounds amazing, but until NVIDIA gives us direct information, it’s all just speculation and rumor at this point.

What do you think, if this is all true, are you excited about the next-generation of Tegra chips?