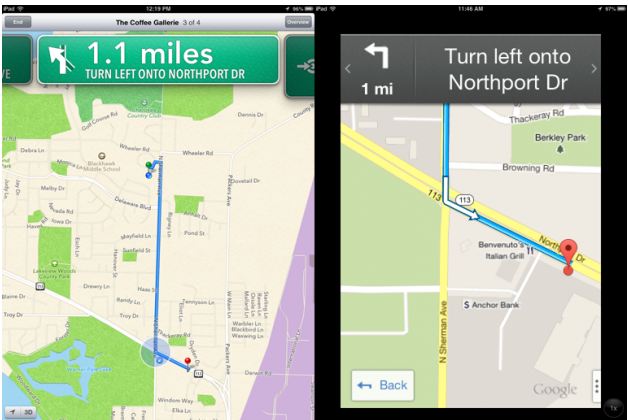 After giving people the wrong directions and putting them in potentially life-threatening situations, Apple Maps on iOS6 has developed quite the reputation for being not so good. Now that Google Maps has finally returned to the iPhone and iPad, is it really that much better than the pre-installed Apple Maps?

AJ Dellinger from Digital Trends put together an in-depth comparison of the two mapping apps and has come to the conclusion that, yes, Google Maps is vastly superior to Apple Maps. A big part of this has to do with the fact that Google is in the business of data and Google Maps is simply an extension of that.

The user interface is both more intuitive and faster on Google Maps, typically required “half as many taps” as Apple Maps to get the same task accomplished. Google Maps has better viewing modes, making it easier to see the streets, as well as having better traffic data. While Apple’s Flyover is nice, Street View is still much more usable and more widespread.

He goes on to say that Google Maps has better search (no surprise there), better directions and navigation, better public transit support (more data), and better destination information with Google+ Local and Zagat.

If you have iOS6, you really should get Google Maps. You don’t want to get stranded in the middle of the Outback with a worse user interface, worse destination information, and no Flyover in less populated areas (like the Australian Outback).