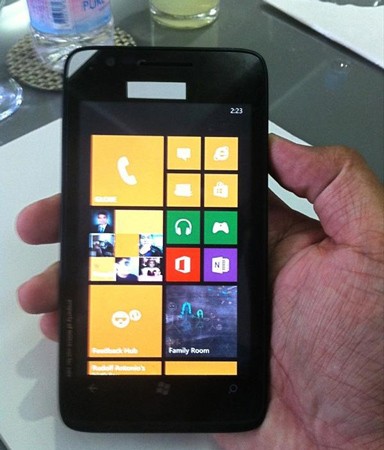 A new photo has now hit the net of what appears to be a massive Galaxy Note-sized Nokia smartphone. The prototype is known as the “Juggernaut Semaphore” and in a setting screen photo reveals that it is running on an up-to-date Snapdragon S4 chipset.

So what is this thing exactly? It could easily be an earlier prototype device that was completely canned, especially judging by the use of the older “Windows Phone 7” logo on the phone’s front. That said, the presence of a Family Room tile indicates this isn’t Windows Phone 7.8— this is clearly Windows Phone 8 onboard.

The other option is that this is a prototype that is an experiment to see how a larger-sized Nokia phablet would look and feel. 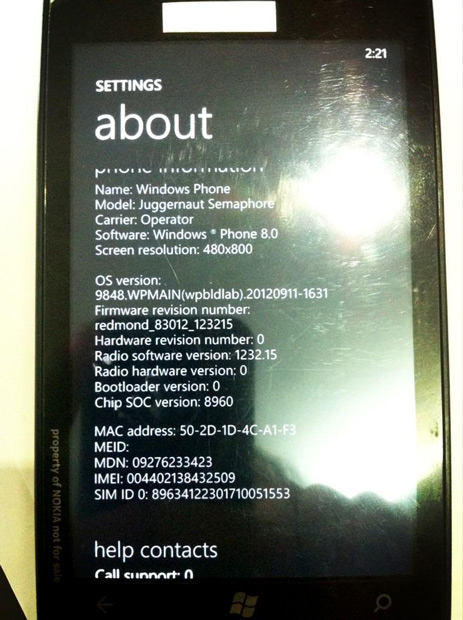 How do we know that this isn’t going to be a commercial device in its current form? Besides the left edge that reads “property of Nokia not for sale”, the biggest indicator is the screen’s resolution. A measely 480×800 is probably good enough for an experimental build to test the viability of phablet-sized devices.

It isn’t good enough to be a real device (unless it is targeted at those that need a big screen for seeing, but don’t need a good resolution?)— but it is certainly fine as a prototype. Additionally, its plain and boring device pales compared to the Nokia Lumia 920 or 820, so I can’t see Nokia releasing something that looks exactly like in these photos.

IF this is the real McCoy, you can probably bet that this is a very old reason and that this Nokia phablet device looks very different in its current testing form. So what do you think, just a primitive old prototype that was tossed out or a hint at an upcoming Nokia Lumia phablet device?