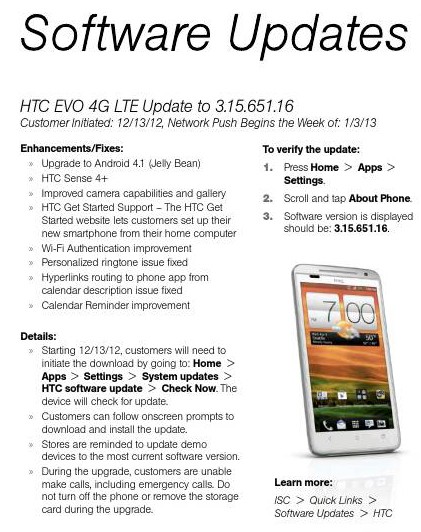 Own an HTC Evo 4G LTE on Sprint’s network? Good news, Jelly Bean is arriving today– or so we hope! The news arrived last night by way of an anonymous tipster reporting to Android Police. The tip came with a photo of an internal Sprint page stating that Android 4.1 would start rolling out today.

Keep in mind that we have no proof that all of this is legit, so take it with a grain of salt. That said, you can probably bet it is. For starters, Sprint’s EVO 4G LTE product page now lists Jelly Bean as a feature. A recent update, I might add. Second, the wording and formatting of the leaked page looks like the real deal from Sprint.

Besides Android 4.1, the update also will come along with Sense 4+, which brings improved front-cam performance, a new gallery app and a few bug fixes.

Based on what we know, you should be able to pull it down for updating today, and it will start pushing out as an upgrade by January 3rd. Any HTC Evo 4G owners out there? Excited for this update? Let us know if/when it arrives!