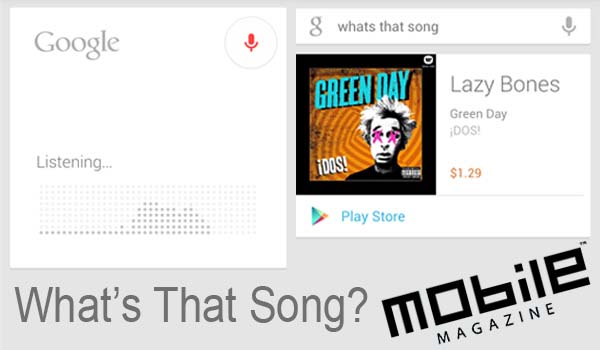 Just a few days ago, Google issued a huge update to the Google Search app for Android. In addition to being faster than the previous version, Google is pushing out many new features and also cards. In my opinion, the “What’s That Song” voice command is by far the coolest.

Of course, you can get this functionality from Shazam and some other apps. However, if you are running Android 4.1+, the feature is now completely inline with the operating system instead of being a third party app.

All you have to do is touch the mic, say “What’s That Song”, and wait for Google to do its magic. The listening takes all of 15 seconds before Google Now either spits out the song name or cannot find it. Judging by the link to the Play Store and testing some songs, we found out that Google Now will only recognize songs that Google is selling in Google Play.

Overall, Google Now got almost all of my songs correct and in good time. Plus, as mentioned before, the feature does not require a third-party app and has a sleek and simplistic design.

Do you enjoy using Google Now? What cards are your favorite? Let us know in the comments below.