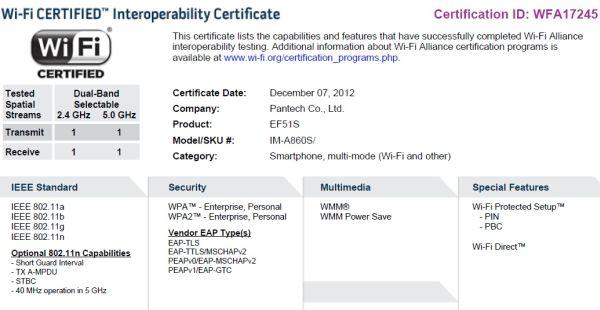 When HTC announced the J Butterfly for the Japanese market, a new chapter smartphone technology was revealed. The age of full HD displays on smartphones is now starting to heat up, with Sony and others all working on entries of their own. In China, there is also the Oppo Find 5, which is expected to arrive in the United States in unlocked form. And now Pantech is joining the club as well.

The Pantech Vega IM-A860S and A860L are heading to South Korea and appear to be the same phone, just different variants for different carriers.

The Vega IM-A860 is a flagship device and is said to have a formal launch just around the corner. Not much is known about the rest of the specs here, but odds are that it will likely have quad-core power to go along with the impressive display. It also very likely has a 5-inch display.

So when will a formal announcement arrive? CES 2013 seems like as good of bet as any. If Pantech eventually brought a full HD phone to your local area would you consider it or not?