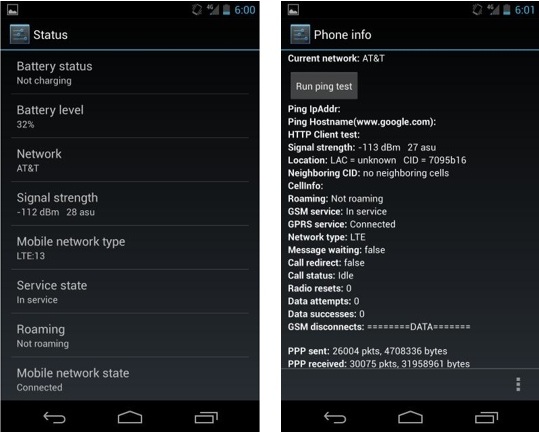 We previously reported that the LG Nexus 4 was able to connect to LTE networks in Canada with a simple tweak that works with a dormant LTE chip inside of the phone’s hardware. Unfortunately, Canada was about the only place that the Nexus 4 would work for LTE.

The good news is that it is now possible to use LTE through band 4 on a few select AT&T markets out there. More specifically, it seems that users in Athens, Charlotte, Chicago, College Station, Dallas, Las Vegas, Los Angeles, Oklahoma City, Phoenix, Raleigh and San Juan all are lucky enough to get support for LTE through the tweak.

The bad news? Even though AT&T owns band 4 spectrum in these areas, it doesn’t mean they are actively deploying it. Additionally, the XDA user who discovered the tweak necessary to make it work hasn’t released the details on how to perform the changes just yet. The XDA user is known as checkitonetime and is reporting speeds of 29.80 up, 10.75 down.

The big takeaway here is that a hacker/modder with enough time and patience can accomplish just about anything. Should you be excited if you are in one of the cities? Honestly, I wouldn’t put too much hope into getting LTE service working. Just because some have accomplished it, doesn’t mean it will work for you.