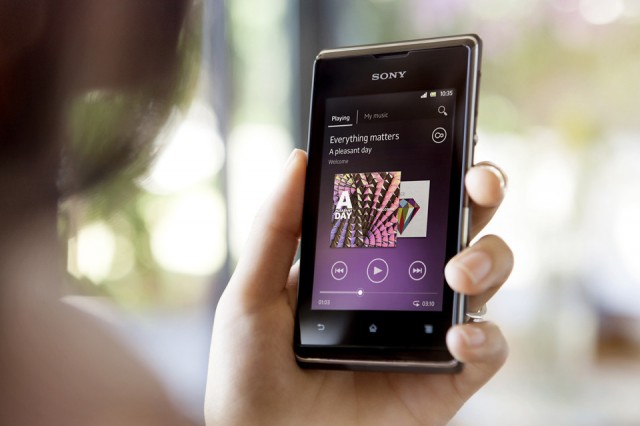 Sony has announced the upcoming release of the Xperia E, a “no-nonsense Android smartphone”.  There is nothing stellar about the specs of this phone but it does have one feature that would never be expected on a phone of this type — Android 4.1 Jelly Bean.

It’s a rarity to find Jelly Bean on a phone of this level as they tend to have older operating systems.  The Xperia E will also be released with a dual-SIM version as well already loaded with Android 4.0, with a 4.1 update in the near future.

The Xperia E has a 3.5 inch touch screen with 320 x 480 resolution, powered by a single-core 1GHz Snapdragon MSM7227a processor.  The Snapdragon has been used in other phones such as the HTC Desire V and the LG Optimus L7.  The Xperia also sports 512MB of Ram and a 3.2 megapixel autofocus camera which doubles as a video recorder.

The Xperia E is a lightweight device weighing in at only 115 grams and measuring 11mm thick.  In that small package is a 1530mAh battery working in symphony with some revolutionary power management tools to bring us 6.3 hours of talk time and 530 hours of standby time.  Included is also a data usage app that monitors apps to minimize hidden data usage, which helps avoid surprise overage charges.

The Xperia E also has the Sony Walkman music player, xLoud enhancements and access to Music Unlimited.  Also featured are HD Voice, DLNA connectivity and an up to 4GB expandable microSD card slot.  The Xperia E will be available in black, white and pink.

The phone is expected to be released for sale sometime in the first quarter of 2013.  We do not yet know what markets will receive it or what it will cost.

Do these features sound like something that appeals to you?