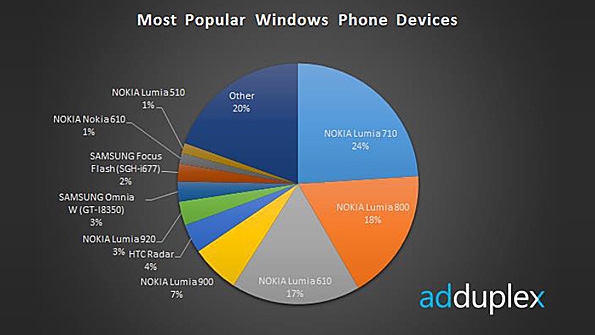 While this probably won’t surprise too many people out there, a new study indicates that the Nokia Lumia 920 is hands-down the most popular Windows Phone 8 smartphone so far.

The mobile ad company Ad Duplex was behind the study. The firm compiled an infographic of Windows Phone market share by monitoring Windows Phone apps that use the AdDuplex software development kit. How accurate is this? Probably debatable, but it should still give us a reasonable picture of what phones currently seem to be in use the most.

The results showed that when compared to legacy Windows Phone devices, Windows Phone 8 marketshare is still pretty puny, though that’s not exactly shocking.

It’s also worth noting that 76% of all Windows Phone 7 devices in use are by Nokia, while 80% of Windows Phone 8 devices are Nokia phones.

What do you think of the current Windows Phone handsets out there? Like what Nokia has to offer, or are you swayed by HTC’s 8x and 8s handsets?