DeadZone puts players into the same universe that Madfinger created with the first Shadowgun game, but this time around, the new game is solely based on multiplayer. The third person tactics used against Shadowgun AI may be useful in singleplayer, but how much does the multiplayer aspect change the game mechanics? And what have Madfinger done to keep the game compelling and enjoyable in a multiplayer environment?

If you’ve played the first Shadowgun game, the controls in DeadZone will be quite familiar to you. The left hand of the screen is used to control the camera angle, and on the right side there is a space for a few buttons. The large circle button is used to fire, and going from left to right from the buttons directly above the fire button are the sprint button, roll button, and reload button. In the top right corner you can switch between weapons and throw grenades.  I found the default layout to be quite comfortable on my tablet, but if you aren’t happy with the layout, you can edit it in the menu by dragging each button to your preferred position. Touch screen controls as they are today are far off from mimicking the precision of a controller or mouse, but being able to adjust your control positions does make it a little easier, and most of all, more comfortable to play with. 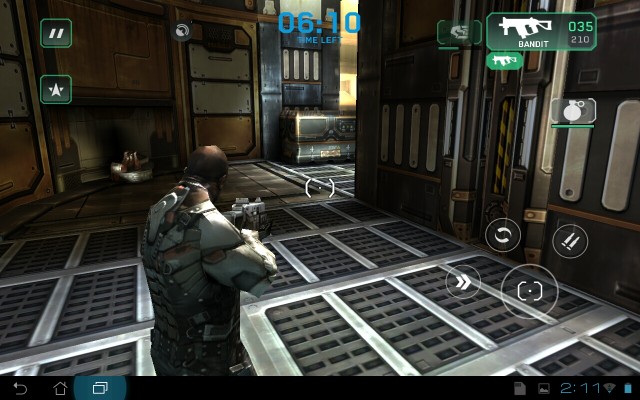 I found it a little difficult to begin with, but after optimizing my settings a little, I was happy to find that the game was a lot easier to play. After defining control settings such as camera sensitivity, I felt happy enough to play the game comfortably for an hour or two in one sitting.

As of now, DeadZone only has two game modes, and one single matchmaking feature to place players in a game. Each game mode has a surprisingly different feel to it, so although you may enjoy one game mode a lot, you might find yourself to dislike the other one.

Regardless of game mode, the basis of the game is still there. Bullet damage between weapons has been fairly balanced, and there aren’t really any game breaking abilities or weapons to unlock, so you’ll be on a pretty even playing ground with all players.

For the most part, DeadZone feels a lot like the original singleplayer game, although with the AI replaced with aggressive players, it makes it a lot easier to be killed.

In combat, you’re still capable of hiding behind cover and pacing back and forth can keep you alive for longer. Sprinting can be useful for covering large distances quickly, but you only have a limited stamina bar, and rolling can be useful in certain situations, but as it slows your character down a little, it’s difficult to use effectively in most combat instances. 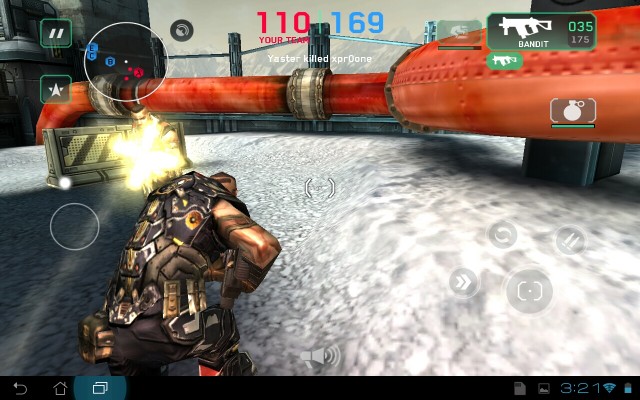 A lot needs to be improved when shooting other players; currently it’s difficult to know if you’re hitting another player, and without any real hit indicators the game feels a bit too sluggish and retro for my liking. Couple that with the bad latency and you’ll have a game that can be frustratingly difficult to play. The potential is definitely there, but some areas need to be touched up on just a little.

The two current game modes in DeadZone are nothing new in terms of competitive shooters, but having the option to choose between the two is great, and because it’s a lot easier to add content to a digital game than it is to a game on a physical CD like Black Ops or Halo, hopefully new game modes will be added in the future.

Deathmatch is extremely fast paced and puts everyone in a small arena and pits them against each other. It’d be nice to have a team Deathmatch mode, because currently Deathmatch is very hectic. Most of the levels put you in a position where it’s difficult to keep fire on one player without getting shot in the back, so it’s important to keep moving to avoid cornering yourself between two players. This also makes cover a little redundant in Deathmatch mode, and the free-for-all environment and fast paced action makes the game feel a lot less like Shadowgun, and more like Quake. 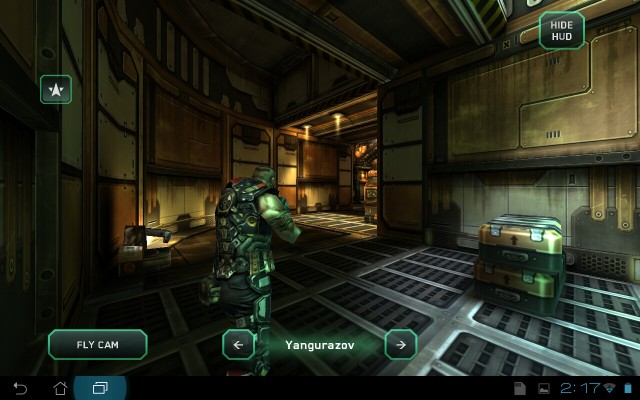 Zone Control is the second game mode, and it’s a lot more tactical compared to Deathmatch. Two teams of six play against each other to capture as many zones as possible. Players must then keep control of the territories to win. If you have a good team, Zone Control is a perfect way to put your teamwork to the test, and along with the detailed levels, Zone Control is a game that takes skill and tactical thinking to be at an advantage against the other team.

The maps have been well designed, and usually feature multiple levels and different routes of access to the main landmarks on each map, You’ll usually find different ‘hotspots’ on most maps where players seem to go often to fight, but there is plenty of room on each map to keep you from feeling too cramped. 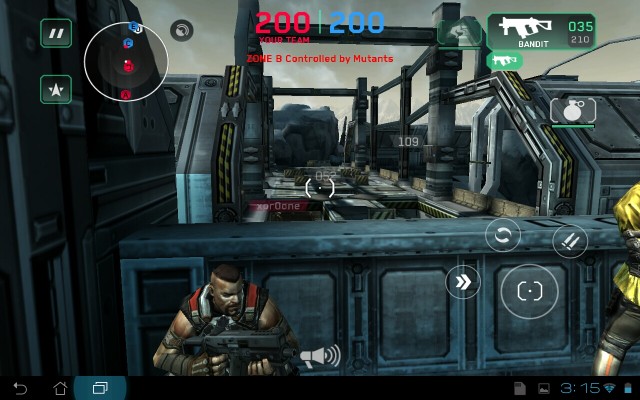 No game would be complete without some sort of progression system, and although some games include pointless gimmicks and abilities, Madfinger has managed to create a well-balanced and rewarding leveling system for DeadZone.

After playing a match you’ll be rewarded an amount of EXP and money depending on your performance in-game. EXP will be used to level your character up, which is mainly a placeholder to show your rank and experience to other players. Money however, can be used to buy new equipment such as weapons, abilities and extra inventory space.

In DeadZone, the research tab allows you to spend your cash earnt in-game to use different equipment. Some of the extra items and abilities are handy, such as sentry turrets or extra health, but the main interest has to be within the guns department. 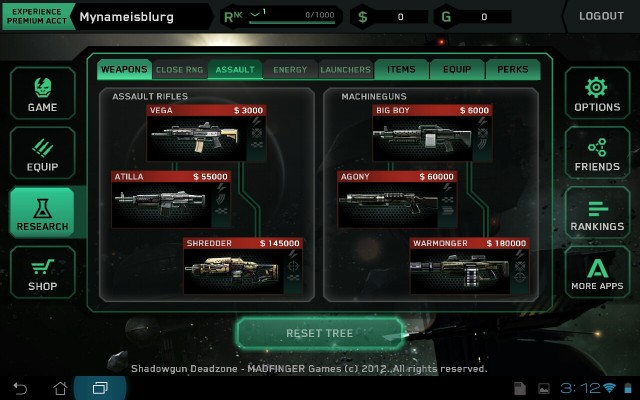 Items in the research tab are split into different trees, meaning that if you want to purchase the most powerful assault rifle, you’ll first have to purchase the other assault rifles in this tree. This gives players the opportunity to try out multiple weapons, and stops players from amassing a large amount of money and buying the biggest gun as soon as possible.

In DeadZone, there is also a cash shop which you can use to buy cosmetic items such as new helmets and characters with real money. The items here are a nice touch to the game, and there is a lot of options to choose from. Some items are a little on the expensive-side though, for example, the most expensive character would require you to spend over $60 to earn enough gold to buy it. 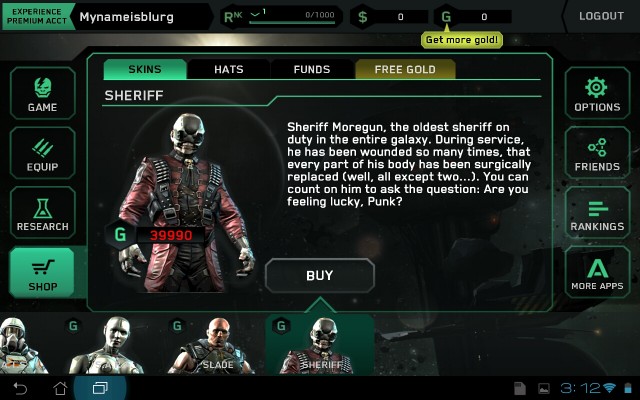 Madfinger have been renowned for making top quality games with high-end graphics. Shadowgun DeadZone is no different here, and things look exceptional. However, DeadZone will run on devices with at least 512MB RAM that run Android 3.0 or higher, allowing players with lower-end devices to play on a low-quality mode.

The graphics can be adjusted in the menu, so it’s up to you whether you’d prefer more FPS over overall appearance.

The audio in Shadowgun is great, and a lot of the resources have been ported over from the original game, giving it its own authentic feel.