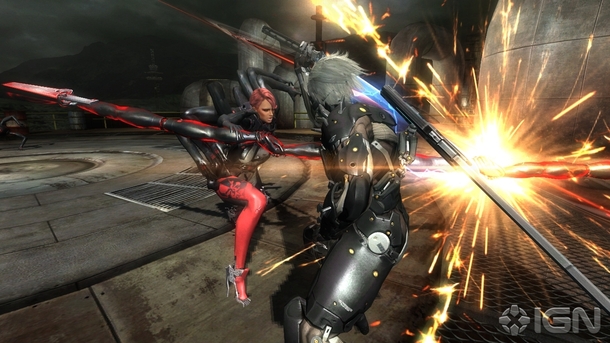 For a lot of people, the Metal Gear Solid franchise just isn’t the same without Solid Snake as the protagonist, but this Raiden guy… he’s pretty epic. And he’s got some seriously epic boss battles ahead of him in Metal Gear Rising: Revengeance.

While developers Platinum Games are taking care of the crazy action in Metal Gear Rising: Revengeance, fans of the franchise can rest assured that Kojima Productions is still handling the plot and the design for the Raiden character. But you don’t have to worry about the action coming up short, because an early preview of the boss battles looks to be pretty awesome.

Yes, the early Ray boss is pretty standard, aside from running down an exploding tower and “slaughtering the [skyscraper-sized] robot with nothing more than a sword,” but the Mistral mid-game boss is another beast altogether. She has multiple arms that attach to Dwarf Gekos for some crazy swarm attack action. There’s a wide open arena and plenty of challenge and intrigue, which leads to a smaller industrial environment where you gain the (no pun intended) edge.

Metal Gear Rising: Revengeance isn’t scheduled for release on PS3 and Xbox 360 until February 2013, but you can pre-order it now to guarantee your copy on launch day.