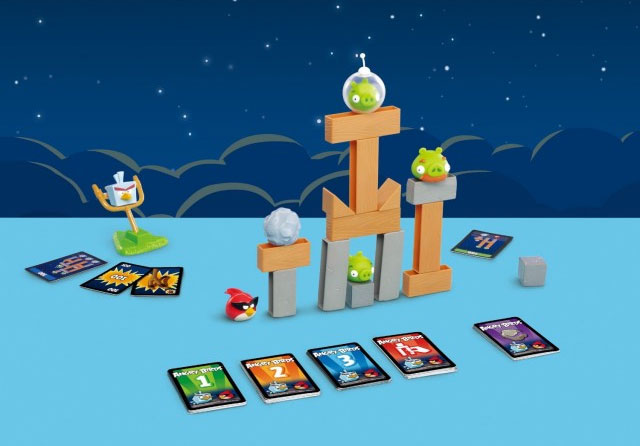 Remember when the trend was to take traditional board games and translate them into digital video games that could be enjoyed on consoles, handhelds and smart devices? It seems that the reverse trend is emerging with digital titles finding their way into the real world and that’s what you get with the Angry Birds: Birds in Space Game.

This isn’t an app for your iPhone or Android tablet. Instead, this version of Angry Birds is much more like a traditional board game with real life pieces. It’s based on the best-selling app, of course, but it has been licensed by Mattel to let you fling real (plastic) birds to destroy the structures erected by real (plastic) pigs. I’m not sure you can replicate the zero gravity environment of space, but you even get a space helmet in the package.

I guess there is something to be said about using a real slingshot instead of simply swiping your finger across a touchscreen. It also helps that you can physically build the pigs’ protective structures, which should tap into the appeal of toys like LEGO and generic building blocks. Also included in the pack are 32 space mission cards and 8 points cards. The game can be played by 2-4 people.

The regular price for Angry Birds: Birds in Space is $21.99, but Amazon has it on sale for $8. That’s 65% off the list price and a pretty decent deal. Get it in time for the holidays and the kids will have a blast after turkey dinner at grandma’s.