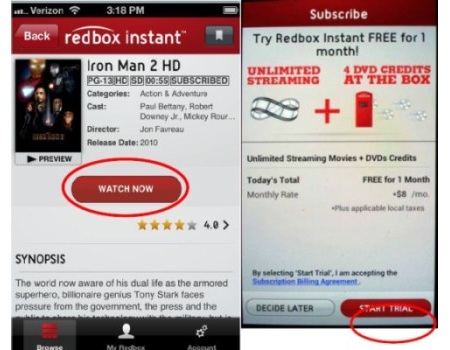 Looking for an alternative to Netflix and Amazon Instant Video? Soon you will have one in the form of Redbox Instant.

Official details have now leaked revealing that the service will set you back just $6 per month for an unlimited subscription. While this is $2 cheaper than Netflix, it is also worth noting that the video selection is going to be significantly smaller. For those that use Redbox regularly, there is also going to be an $8 subscription that includes four Redbox credits each month that you can use to pick up a movie over at your local Redbox.

Redbox Instant will run using Microsoft Silverlight technology and will be compatible with the PC, Android, iOS, Xbox 360 and Samsung’s Smart TV platform. More than likely other platforms will be supported down the road as well.

So when is the new service coming? The leaked information from Redbox suggests the new service will be officially launched to the public on December 17th. What do you think, tempted by this Netflix alternative or not?