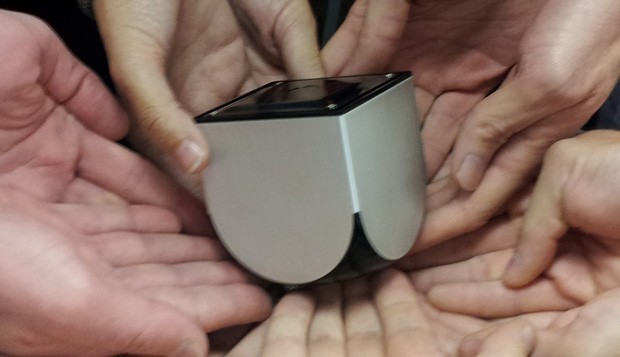 Remember the Ouya? It has been a little while since the last time we featured an article about the open-source Android console. The good news is that the little Android box is finally almost here, with developer kit versions of the Ouya shipping out on December 28th.

We always knew that the Ouya was a small yet relatively capable little cube, but the picture above now drives home just how small the cube really is.

Wondering what the difference is between a developer version and a retail consumer Ouya? Honestly, there probably isn’t tons of differences, though the company does say that the dev units are “pretty special”– take that how you will. We do know that these developer versions will come rooted out of the box, whereas the standard commercial version will allow rooting but will require user intervention to unlock the root.

So, developers are finally getting the first true taste of the Ouya, but what about the rest of us? As a reminder, the retail arrival for the Ouya is expected in April of 2013, at a price point of just $99.

Are you excited for the Ouya, or with next generation consoles just around the corner, has the open-source Android console lost its appeal?