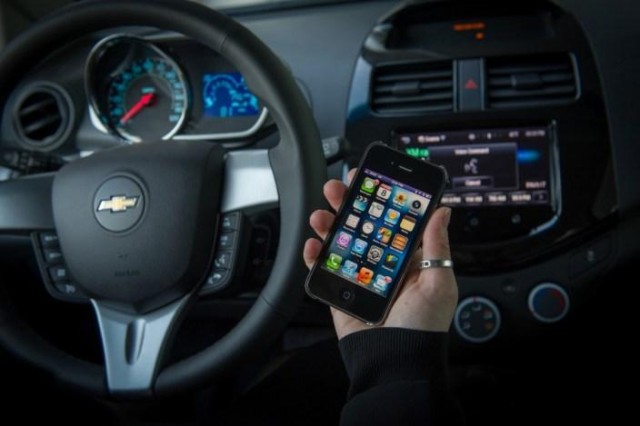 This morning at the Los Angeles International Auto Show, General Motors (GM) released a press statement saying that sometime next year the Chevrolet Spark and Sonic will be outfitted with Siri, the intelligent assistant.
Before you get too exited, let me explain to you how GM plans to go about doing this. Unfortunately, your brand new Chevrolet will not come with an iPhone 5 or any other Apple device. Instead, drivers can connect their iOS 6 iPhone to the car’s Chevrolet MyLink system. GM added that MyLink comes standard in these cars and put an asterisk by iPhone. Although they did not address the asterisk, we assume that you will be limited to using an iPhone 5 and/or an iPhone 4S.
Eyes free can be used to: make hands-free calls; play iTunes music; switch between radio and iPod mode; listen to and compose iMessages and text messages; and access and edit your Calendar. Furthermore, Eyes Free mode will disable your iPhone’s screen from lighting up and also from displaying web pages as answers in Siri.
So what do you think, will you be buying a Chevy vehicle equipped with Siri Eyes Free next year?