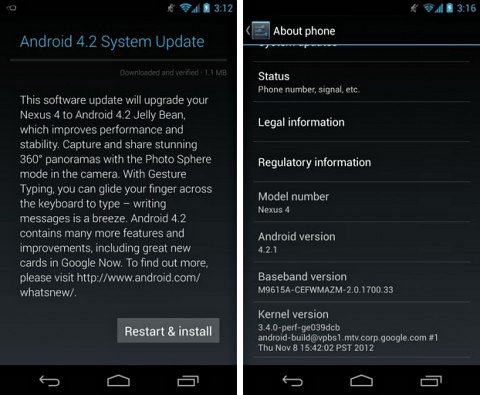 While few handsets have even received the first taste of Jelly Bean with Android 4.1, the Nexus crowd not only has Android 4.2 but seems to be getting an update in the form of Android 4.2.1 today. The update is said to be arriving for Nexus 4 and Nexus 10 for sure, though there have been reports from Nexus 7 owners that they are getting the update as well.

Okay, so Android 4.2.1 isn’t exactly an epic update at only 1.1MB. Is there anything to get excited about here? If you like December maybe. It seems that the December bug that made it impossible to save birthday or anniversary events in the People app is now fixed. The update is also said to address some reported Bluetooth issues on Nexus products.

Did you get the update today? Anything noticeable in that tiny little update, or was it pretty much just a minor fix for the calendars and Bluetooth issues?