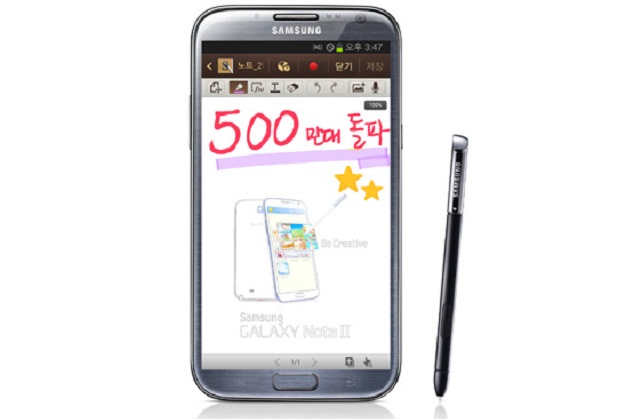 Who said there was no market for a supersized phablet? There’s a reason why every other cell phone company seems to be jumping onto the 5+ inch bandwagon, because Samsung has just announced that the Galaxy Note 2 has exceeded five million units in worldwide sales.

Remember that the 5.5-inch successor to the original Galaxy Note only launched a mere two months ago. In its first month, the Samsung Galaxy Note 2 broke the three million mark in sales and, less than a month later, it has added another two million to that count. Maybe people really do like that S Pen, it seems. It also helps that the Note 2 is available in everywhere from Korea to Europe, Middle East to Latin America. The device also has solid specs overall and reasonably attractive styling.

To be fair, while selling five million units is no small feat, it still pales in comparison to the flagship Galaxy S3. Yes, the Galaxy S3 has been out for longer, but earlier this month, that Android superphone broke the 30 million mark. Whatever the case, the trend is clearly moving toward larger Android smartphones. We’ve got the HTC Deluxe (Droid DNA with Verizon) on the way, after all, and it certainly won’t be alone moving forward.

Do you prefer a larger phone like the Samsung Galaxy Note 2 or do you prefer something with a slightly smaller display and overall size?