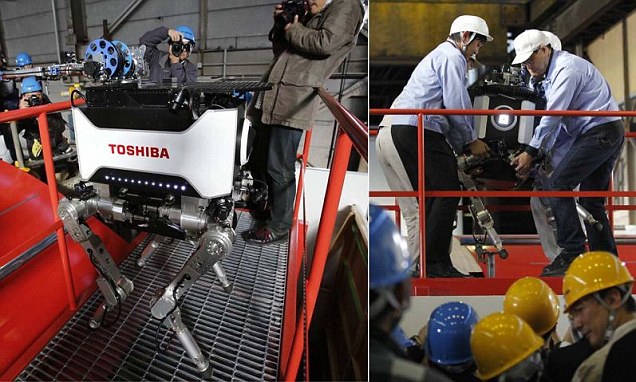 When conditions become too dangerous for humans, we turn to robots. For example, robots have been used as bomb “defusers” and recon drones for years. As for radiation, robots can come in handy there, as well. Unfortunately, last year when Japan ran into a nuclear disaster at Fukushima they weren’t probably prepared for the incident and had to turn to the U.S. for nuclear disaster-ready robots. It seems that Japan is working directly with Toshiba to ensure they aren’t caught with their guard down ever again.

On Wednesday, Toshiba showed off a robot that would be able to withstand conditions similar to that of the Fukushima Dai-ichi nuclear plant disaster. The robot has 4 legs for climbing up and down stairs (at about a step per minute) and over debris.

While it is a good step in the right direction, Toshiba’s robotic design isn’t without its faults. The machine’s awkward design proved detrimental in a demo with the press. More specifically, one of its legs froze and multiple people had to help it up and reboot. Additionally, Toshiba added that if the robot fell during a mission, it would not be able to get up by itself.

Despite its shortcomings, Toshiba’s four-legged robot is expected to make a debut at the Fukushima Dai-ichi nuclear plant soon.