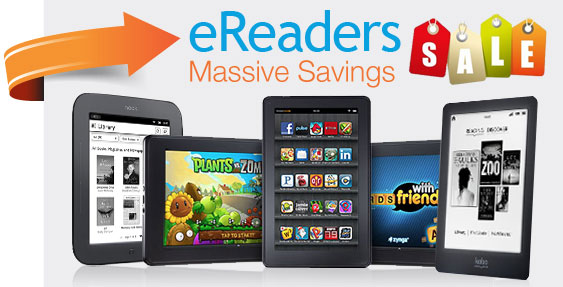 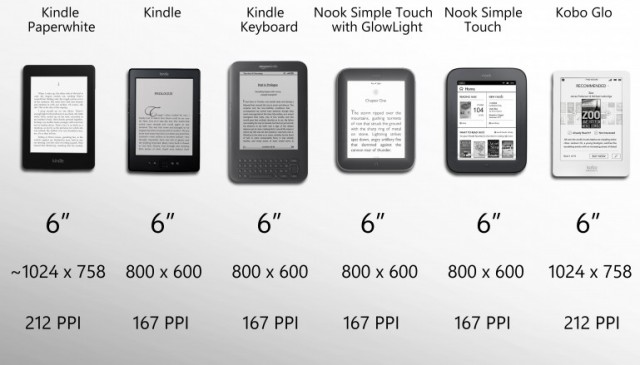 While many people have turned to their iPads and Android tablets for the purpose of reading e-books, there is still very much a market for the dedicated eReader. The e-ink display is so much easier on the eyes and the battery life is way better than what you’d get from a tablet. But, which one is best?

A quick comparison has been put together with some of the heaviest hitters in this space, taking a look at the Amazon Kindle Paperwhite, Kindle, Kindle Keyboard, Nook Simple Touch with GlowLight, Nook Simple Touch, and Kobo Glo. There are others to be considered, like those from Sony or other Kobos, but these are some of the most popular and their comparison should help narrow down your choices.

All six of the eReaders featured in this overview use some form of e-ink technology for their displays rather than the regular backlit LCDs you find on tablets. You’ll also notice that they’ve all congregated on the 6-inch form factor, though you’ll find other variations from Amazon, B&N and Kobo that come in other sizes. The resolutions are mostly the same, though the Paperwhite and the Glo have significantly better PPIs. It’s also noteworthy that the Glo, Paperwhite and Nook with Glowlight are the ones with lit displays for dim reading situations.

Since they all have six-inch displays, the overall dimensions of all these eReaders are roughly the same. They measure approximately 165 x 120 x 10mm with some variation and they all weigh right around 170-210 grams or so. The lone exception is the Kindle Keyboard, since it has that physical QWERTY keyboard beneath the display, stretching its length to 190mm and bumping its weight to 247g.

Not surprisingly, all six of the eReaders also have roughly the same amount of storage space. After all, e-books are very small files and you don’t need much space. The Paperwhite and Kindle both have 2GB, while the Kindle Keyboard has 4GB. The Nooks and Kobo Glo all have 2GB, plus a microSD expansion slot. That memory expansion could prove to be an important feature for people who want to carry a lot of content with them.

They all have Wi-Fi, but you can opt to get the Kindle Paperwhite as a WiFi+3G mdel. The Kindle Keyboard is sold only as a WiFi+3G eReader.

The Kindle, Nook Simple Touch with GlowLight, and Kobo Glo all have batteries rated in the 4 week range, while the Kindle Paperwhite, Kindle Keyboard and Nook Simple Touch (sans GlowLight) last twice as long at about 8 weeks. Of course, your mileage will vary based on usage, especially when it comes to how much you use the lighting features. Charging any of these eReaders will take you 3 to 4.5 hours.

This will be a big deciding factor for many people. The cheapest of the bunch is the regular old Kindle that starts at $69, but you could also consider something like the Kobo Mini (5-inch) that starts at around the same price range. It is worth noting that all Kindles come with the “Special Offers” advertising that you’ll have to pay $20 to eliminate. If you hate ads, you’ll need to factor that into the price. It’s also debatable whether the Kindle Keyboard is really worth its premium just for a keyboard.

At the end of the day, which eReader you choose will really depend on several factors. Price is one, to be sure, but you’ll also want to think about size, backlighting, and the ecosystem. Whatever the case, it’s a good time to be a consumer, because we are offered a lot more choice than when the original Kindle was the be-all and end-all of e-book readers.