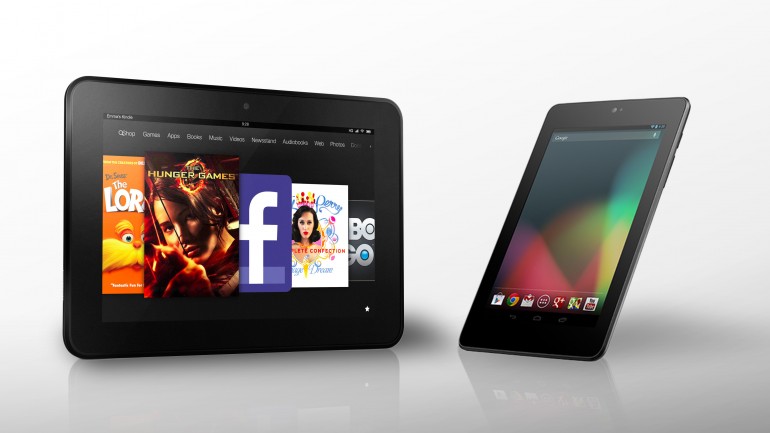 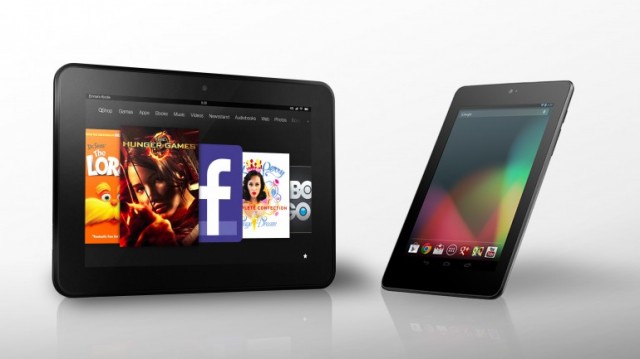 Earlier this week, we compared the Kindle Fire and new iPad in a tablet shootout. Many people commented that a much better alternative to Kindle Fire HD 8.9″ is the Google Nexus 7, so we thought it would be apt to put together that viable comparison too.

Starting with the most obvious difference, the Nexus 7 is the smaller of the two with its 7-inch display running a resolution of 1280×800 pixels for a density of 216ppi. The Amazon offering has an 8.9-inch display at 1920×1200 pixels for a density fo 254ppi. The Kindle Fire HD is both bigger and has better pixel density, making for a better display.

While both tablets are perfectly capable, the Nexus 7 looks like it wins on paper with its NVIDIA Tegra 3 quad core 1.3GHz processor. The Kindle Fire HD has a TI OMAP 4470 dual core 1.5GHz. That’s a higher clock speed, but the Nexus 7 has more cores. Both tablets have 1GB of RAM.

Looking at just the WiFi-only model of the Kindle Fire 8.9″, both it and the Nexus 7 are offered in your choice of 16GB and 32GB of capacity with neither offering a memory card slot. If you opt for the LTE version of the Fire, you can get up to 64GB.

Speaking of LTE, that’s one feature that differentiates the Fire from the Nexus 7, the latter of which is only offered with up to HSPA+. Naturally, both get Wi-Fi. The downside is the LTE version of the Kindle Fire HD costs a whopping $200 more than its WiFi-only version.

Both tablets rock a front-facing camera in the one-megapixel range for video chat, lacking a rear camera for any kind of primary shooting.

While it is certainly true that both tablets are powered by Google Android, the Kindle Fire HD 8.9″ is heavily skinned with the Amazon OS, complete with heavy Amazon store integration. In fact, it ships with “Special Offers” advertisements that cost $15 to remove. You also don’t get the full Google Play Store. The Nexus 7, on the other hand, is a pure Google experience with the Google Play Store and no integrated “Special Offers” ads. The Nexus 7 wins here for most users.

Unless you are really bent on having that larger 8.9-inch display with better pixel density or you really like the Amazon storefront being front and center, the Nexus 7 is likely the better bet here. It’s cheaper and it’s more versatile with its vanilla Android OS and Play Store access.