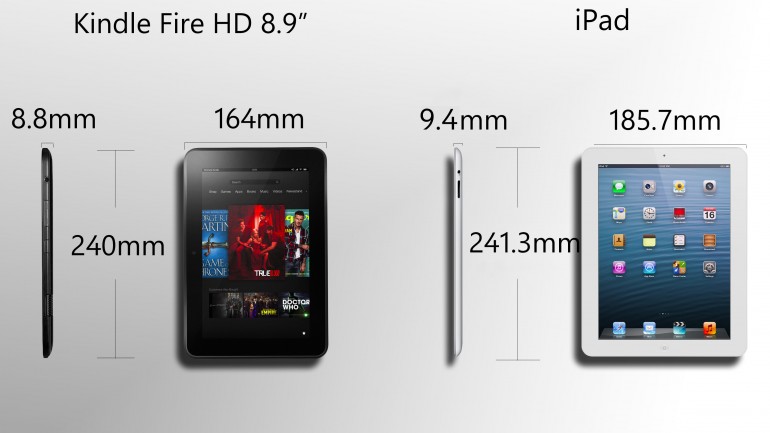 Are you shopping for a new tablet this holiday season? Are you disheartened that the Samsung Nexus 10 is sold out? Fret not, because this is probably one of the best times to be a tablet customer. If you can’t decide between the Kindle Fire HD 8.9″ and the new Apple iPad, this is the comparison for you.

The surprising thing is that even though the Kindle Fire HD 8.9″ starts at a full $200 cheaper than the starting price for the Apple iPad ($299 vs. $499), the specs on paper are actually very, very comparable.

The new iPad is powered by a dual core Apple A6X processor running at 1.5GHz, while the new Kindle Fire HD 8.9″ has a dual-core TI OMAP 4470 1.5GHz processor. They both have 1GB of RAM too. Based on this, the actual performance for the average consumer should be roughly comparable.

The starting point for the both tablets is at 16GB. The Kindle Fire HD can get bumped to 32GB, as can the iPad, but it’s only the iPad that can go even further with 64GB of storage. Of course, you’ll have to pay more money for that too.

Both tablets are available in your choice of WiFi-only or Wi-Fi plus LTE. If you need to stay connected, either tablet will do the job.

While both tablets have a front-facing camera (1MP on the Kindle Fire HD, 1.2MP on the iPad) for video chats, only Apple’s tablet has a 5MP rear camera. This isn’t a huge deal–the Nexus 7 doesn’t have a rear camera either–but it could be an important differentiator for some people.

The Kindle Fire HD 8.9″ is powered by a modified version of Google Android, but it does not have access to the full Google Play Store. You can only go through the Amazon Appstore, which limits your options. At the same time, some people might prefer the Amazon-ified OS over a more conventional Android interface, since it is simpler and more geared toward media consumption. The iPad, of course, is powered by iOS and comes backed by Apple’s gigantic App Store. If you want tablet apps, not much can compete with Apple’s juggernaut at this point.

As mentioned at the top, this is really where the Kindle Fire HD 8.9″ beats the new iPad by a long shot. Starting at $299, Amazon’s tablet is only a little more than half the price of an equivalent iPad. Considering that the core guts are so comparable, it may be hard to justify the Apple tax on the iPad, but it is arguable that iOS is superior and there are more iPad apps.

For my part, if you’re choosing between these two and you’d rather buy into the Apple ecosystem rather than the Amazon ecosystem, it might make more sense to consider the $329 iPad mini instead. It’s not as powerful as its bigger iPad 4 cousin, but it’s a heck of a lot cheaper too.