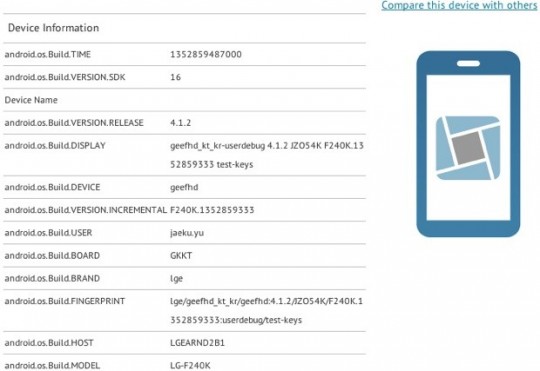 The LG Nexus 4 and LG Optimus G currently represent a pretty noteworthy change for LG, in that they are premium devices with relatively cutting-edge specs. In the past they mostly focused on low and mid-range devices but now it seems that LG might continue to push into the premium market. A mysterious device code-named the LG F240K has now shown up on GLBenchmark, bearing a 1920 x 1080p display.

Other specs from the GLBenchmark indicate the device is powered by a Qualcomm Snapdragon S4 Pro 1.5GHz quad-core processor and runs on Android 4.1.2 Jelly Bean. As for screen size? Following the HTC Droid DNA and a bunch of other leaks about 5-inch 1080p handsets, you can pretty much bet the farm that the LG F240 is also a 5-incher.

Would you be interested in an LG smartphone with a 1080p resolution or is there another leaked 5-inch 1080p project that appeals to you more?