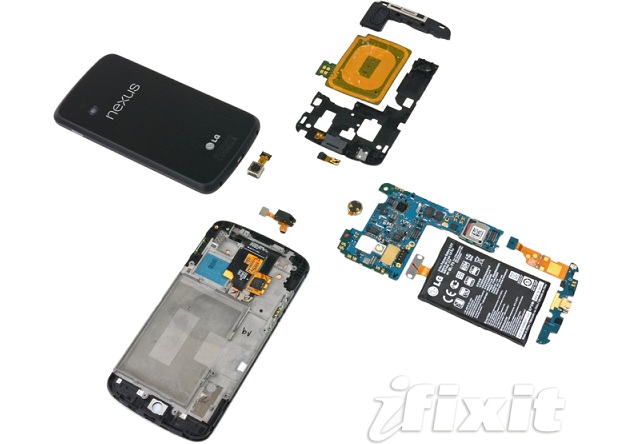 The LG Nexus 4 is finally here, at least for those that managed to actually get one ordered and didn’t end up with a back order notice. Despite the shortage of devices, it seems that iFixit has managed to get ahold of the phone and have made some pretty interesting observations, including the discovery of what appears to be a 4G LTE chip inside the phone.

That’s right 4G LTE. For those that were bummed at the lack of LTE in the LG Nexus 4, don’t get too excited here. The chip might be present, but it is dormant. The LG Nexus 4 is based on the LTE-equipped LG Optimus G and so the chip ended up in the Nexus 4 re-design of the Optimus G hardware.

The Qualcomm WTR1605L is a seven-band LTE chip. What’s holding it back from working? The chip is said to have no LTE power amplifier and is lacking the 4G LTE antenna that it would need to get an LTE signal. Other discoveries noted by iFixit include that the phone had a repairability score of 7 out of 10 and that the battery is in fact non-removable. From what they’ve seen, attempting to do so is practically impossible without damaging your phone.

Are you planning on purchasing the LG Nexus 4 or does its lack of 4G LTE make you want to consider another phone instead?

Source: iFixIt via the Droid Guy