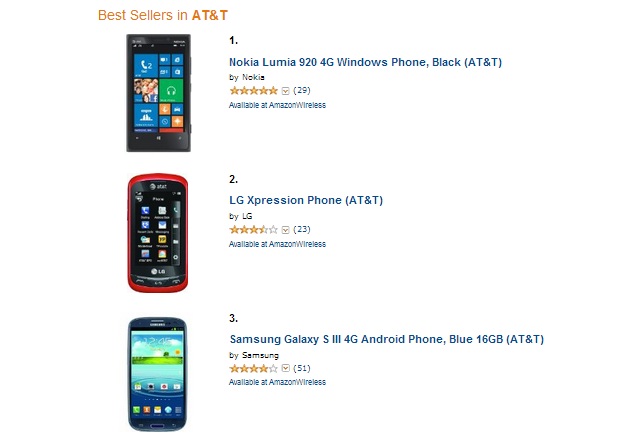 Windows Phone 8 has been on the market for several days now, so how are things going? While there has been reports that there weren’t enough units ready to meet the demand, it still seems that devices are selling well. In particular, the Nokia Lumia 920 is doing exceptionally well so far.

We previously reported that Windows Phone 8-powered Nokia Lumia 920 hadn’t moved up on Walmart and Best Buy bestseller lists, but that largely could be that they just don’t change the lists quickly enough. Interestingly though, Amazon now places the Nokia Lumia 920 at the very top (1st place) of AT&T’s bestselling devices list.

When it comes to overall smartphone sales from all carriers how does it rate? It’s at number 17. This isn’t bad at all, especially considering that AT&T is the only carrier selling the Lumia 920.

Although Nokia hasn’t been that popular in the United States for a while now, the strong reception of the Lumia 920 is a good sign. It’s too early to say that Windows Phone 8 is a massive success by any means, but Microsoft could finally have a mobile OS that firmly positions the company in third place in the mobile market. Of course, they will have some competition for third place in the form of Firefox OS and the upcoming RIM Blackberry 10.

Do you think that Microsoft Windows Phone 8 has what it takes to finally solidify its position in the smartphone market? Are you more interested in HTC, Samsung or Nokia’s WP8 devices?