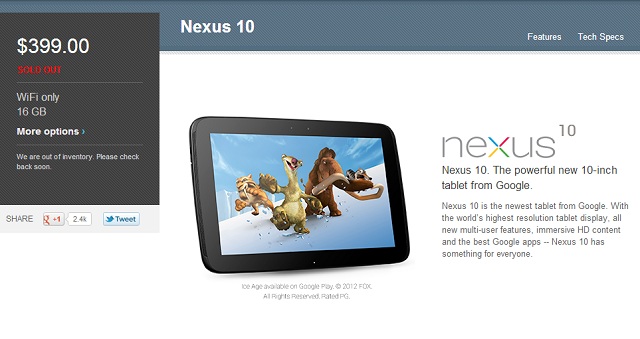 November 13th saw the official release of the LG Nexus 4 and Samsung Nexus 10, at least for those lucky enough to actually order one before stock dried up. Within hours, almost every market was sold out of the Nexus 4 and Nexus 10, but the United States still managed to keep enough Nexus 10 16GB models in stock it seems. Until today, that is.

The 16GB version of the Samsung Nexus 10 is now “sold out” in the Play Store. At least it managed to last two days. You have to wonder why it lasted so much longer, though. Did Google incorrectly believe the 16GB Nexus 10 would outshine the 32GB model and prepare a lot more stock? Or simply was there limited interest in the smaller-sized option to begin with?

Although the recent Nexus launch has been a success when it comes to numbers, it has certainly been a bumpy ride with glitches and ordering issues for potential Nexus buyers and now the arrival of “back order” notices for many of the individuals that managed to “buy” the Nexus 4.

Were you able to get your hands on the Nexus 4 or the Nexus 10? If not, will you wait until they come back in stock or are you considering an alternative tablet or smartphone instead?