Monster Pet Shop is a relaxing game that allows the player to care for and raise monsters, and run a pet shop business. Gameplay is slow, but it’s not taxing on the player and it’s a great way to pass the time.

When you first start Monster Pet Shop, you’ll be taken through a tutorial so that you can get a better grip with the game. The tutorial, although a little fast paced, contains all the information you’ll need to play the game, and the developers have also included a huge guide which can be accessed from the menu. Although the guide is not needed, it’s a great tool for when you want to get further into the depths of the game. 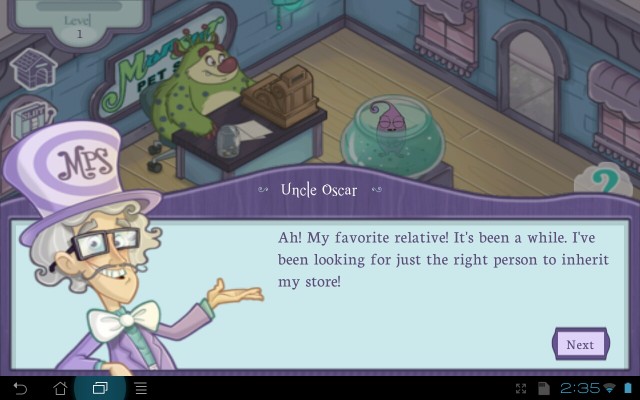 In Monster Pet Shop, you’ll be given different monsters to breed and raise. When you first start you’ll have one monster, but as you play through the game you’ll earn more eggs to raise. When raising a monster, there are four stages to work with. Firstly, your monster will start in an egg, and at this stage all you can do is wait for the egg to hatch, which usually takes a hefty 2 hours real-time.

Once hatched, your monster will be a baby and you’ll have to feed it regularly for it to grow. When you enter a monster’s habitat you’ll see its hunger information and its growth bar in the top right. At this point it’s usually a slow process, but hopefully you’ll have other monsters to care for as well. 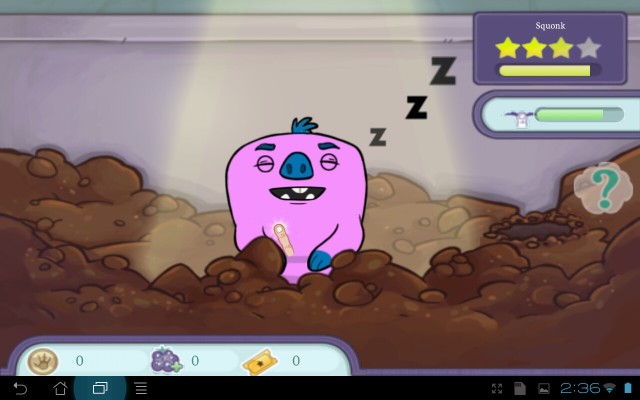 The third growth stage is at childhood, and this is where the most interaction happens. You’ll have to keep your monster’s habitat clean, feed him, pet him and play with him. It’s quite easy to understand but to make the most out of your equipment you’ll need to experiment to find out what each monster likes best. Childhood lasts a long time and it can become quite tedious to keep going back and caring for it each time it needs attention.

There are special berries that you can buy with real money to speed up most mechanics in the game, but there’s a limit to how much each berry can do, and unless you’re going to be paying a constant stream of cash, you’re going to have to do some waiting at some point in the game. 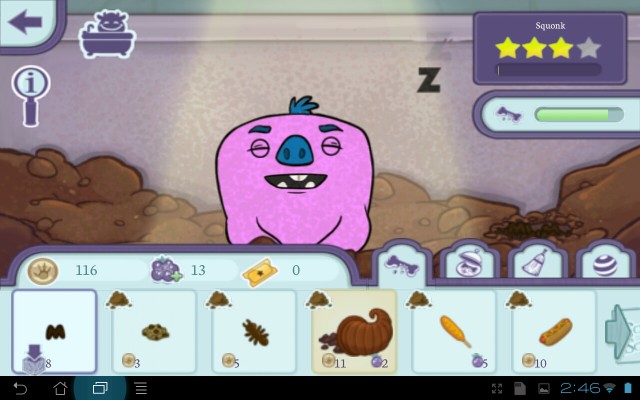 To make sure all your monsters are living in the optimum conditions, you’re going to need a steady source of income, and although the berries mentioned before are an ample choice, the main source of money comes from selling mature monsters to customers. Customers will come in and request a monster, in the same way that they would ask for a cup of coffee, however, they’ll leave the shop and you’ll be given a decent amount of time to raise the monster before calling them back into the shop and making some income.

If you keep selling monsters, you’ll run out, so it’s important to breed your own monsters or invite friends to play and breed with theirs. Breeding can often give out interesting results and if you’re lucky, you can land yourself a rare monster, which offers significantly more cash and exp when sold. 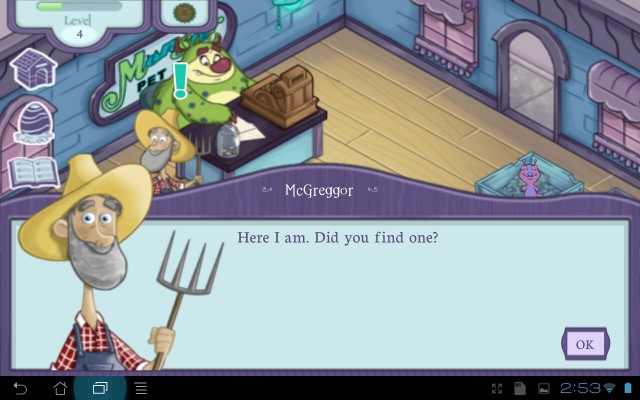 It seems no game these days is complete without a progression system, and in Monster Pet Shop it’s no different. You’ll earn experience from raising and selling mature monsters which will then go towards leveling you up. Each level will unlock new items and allow you to care for more monsters at once. Although the gameplay does become repetitive quite quickly, there are tons of monsters to find and unlock, and the unlocked ones can be seen in your monster guide book.

Monster Pet Shop is slow-paced and relaxing, but it offers a rewarding gameplay with plenty of progressive traits and unlockables. The game can be tedious without spending in-game currency however, and after a while the game ends up feeling repetitive.