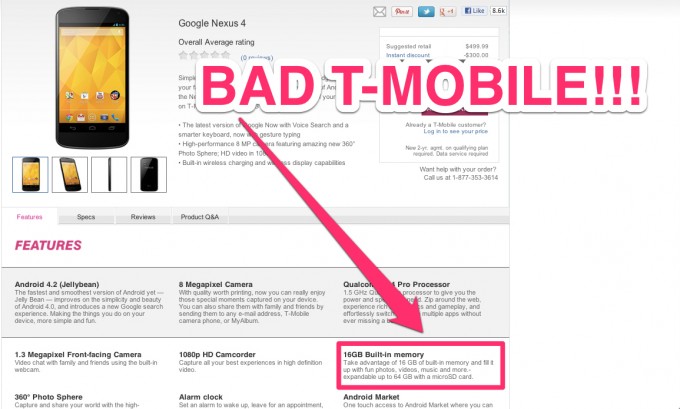 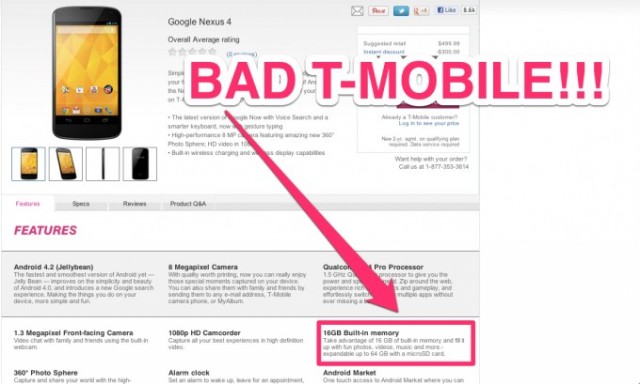 If you thought your newly ordered T-Mobile version of the LG Nexus 4 was special because of the advertised “microSD port” on T-Mobile’s sale page, we have some bad news for you. In T-Mobile’s fantasy world there might be microSD, but not in the real world. This was apparently just a misprint.

This is a pretty big mess-up really. After all, there are probably at least a few customers that say this and said, “Heck yah, I’ll get this for $199 on contract and get a microSD port as a bonus!” Imagine how angry these duped individuals will be when they learn the truth. Anyone closely following the Nexus 4 might have called this out as a mistake instantly, but not everyone is “in the know” about this sort of stuff.

This isn’t the first thing related to the LG Nexus 4 that T-Mobile has misrepresented. Many consumers also believed that T-Mobile’s WiFi calling feature would be supported, since they originally stated that it was a feature for the Nexus 4. We now know that this isn’t correct. That being said, as long as you understand what you are getting– going through T-Mobile for the Nexus 4 is still a reasonably decent option if you just can’t afford to pay the $299+ outright to get the Nexus 4 from Google. Do you plan to get the LG Nexus 4 through T-Mobile or will you get it unlocked via Google Play instead?