Angry Birds is no doubt the most popular game on smartphone markets today, and as the franchise has progressed, some games and remakes have made the series feel a little stale. However, Angry Birds Star Wars has produced a refreshing breath of air onto the Angry Birds line of games and playing it feels like playing Angry Birds for the first time all over again.

If you’ve never played an Angry Birds game before, I’ll give you a quick introduction: In Angry Birds you are given a set of birds at the start of the game which can be fired at different enemies on the other side of the screen. Different Birds have different powers, so the game requires tactics and good thinking to take out all the bad guys before running out of birds to fire. 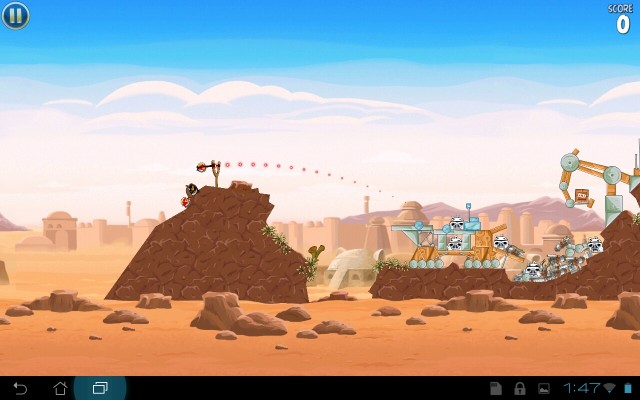 For those that have already played it (most of you, I hope.) Angry Birds Star Wars is still the same old concept as before, but they have renovated some areas, and it’s made for a completely new experience. Each Bird now portrays a Star Wars cameo, and with each Star Wars Bird there comes an ability that is unique to that Star Wars character in the movie. Most of the abilities are completely new in regards to previous Angry Birds games, and thanks to Star Wars these abilities actually make sense when playing.

I won’t go into too much detail about what characters do what, as you can all find that out for yourself, but as an example, Han Solo has a blaster ability that can shoot once he’s left the catapult. The Han Solo bird is based off of the yellow bird, and the blaster follows a similar rule to the speed boost of the yellow bird, as the blaster bullets will go in the direction of where you tap on the screen. However, Han Solo will keep flying through the sky, making it useful for tricky situations where you’re needed to divert your fire. Blaster bullets can also bounce off of metallic objects, and this here alone opens up a huge range of possibilities for new maps and level mechanics. 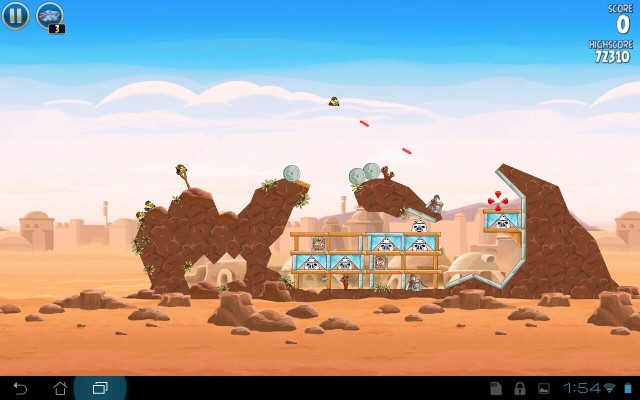 There’s moments in Angry Birds Star Wars where I’ve been astonished at the clever level designs and the intricate detail to different mechanics within each level. Unlike previous games, the levels don’t just feel like a bunch of towers stuck to different scenery. All the scenery in AB: Star Wars work together to create a whole level that just would not work if you were to take a small piece of scenery out of the level. Angry Birds Star Wars also includes a lot more levels with moveable hinges and other mechanics such as Storm trooper pigs that fire back at the birds. It doesn’t just take a well-placed tap of the screen anymore; Star Wars encourages players to think about their movements carefully, whilst timing them up to achieve the biggest potential. 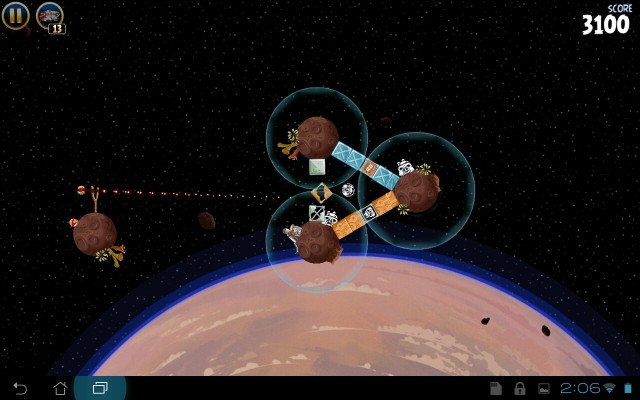 I quickly skimmed through a lot of the levels and found myself constantly hitting one or two stars, and this is because the levels have been planned out well enough that only the most well thought out plans will award the players with a full three star rating. There’s also a lot less of a need to worry about misplaced shots or super accurate aiming on this game either, and although I haven’t played through every single level yet, I haven’t once come across a level where I needed to waste a lengthy time to aim up a perfect shot.

Each level also caters well to the birds you’ve been handed, and each bird has their own weaknesses and strengths against different elements within the level.

One of the major things about the Angry Birds series that I have loved is the huge amount of content within the game. Some of it is available right away, but most of it takes skill and a well-trained eye to unlock. Star Wars Angry Birds follows this fashion and includes golden eggs that unlock bonus levels just like previous games. I’ve come across a few golden eggs, and they’re pretty difficult to reach! From the menu, you can see the different pigs and birds you’ve seen in the game, whilst all the others yet to be seen are blacked out. This screen isn’t really anything special, but it feels nice to watch our progress by keeping an eye on this screen. 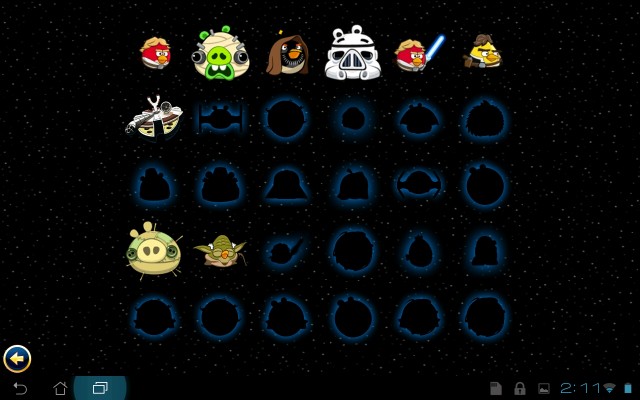 There are a lot of levels available in the free version, however some need to be paid for. The price is only $1.99 to unlock all of the levels, which is incredibly reasonable in my opinion.

There is also one item that can be bought with in-app purchases, and that’s the Millennium Falcon. The Millennium Falcon basically destroys everything in its path with a high-powered super-cannon, and although it’s useful for getting past difficult levels, it’s not really worth buying any with in-game cash because you will unlock Millennium Falcon uses by earning stars whilst playing. The Millennium Falcon is a bit game-breaking, and it seems a little pointless to spend money on something that completes the game for you. 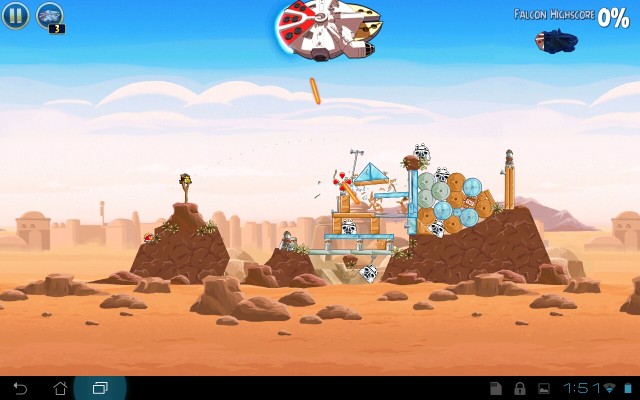 I would find it much more appealing if pay-to-receive content included cool costumes for the birds or crazy effects in the game that don’t take too much from the basic gameplay experience.

If you’re an avid Star Wars fan you’re going to love this one; AB: Star Wars incorporates a lot of authentic sounds from the Star Wars movies, and although the game is cartoony and unrealistic, it still captures the essence from the original Star Wars trilogy. The different pig and bird models are very playful, and once again Rovio have done a wicked job at capturing all that is Star Wars in their new Angry Birds game. If you’re not into Star Wars, the new Angry Birds still feels like an Angry Birds game, and even with the different sound effects and graphics, the basis of the game is still of an Angry Birds origin. 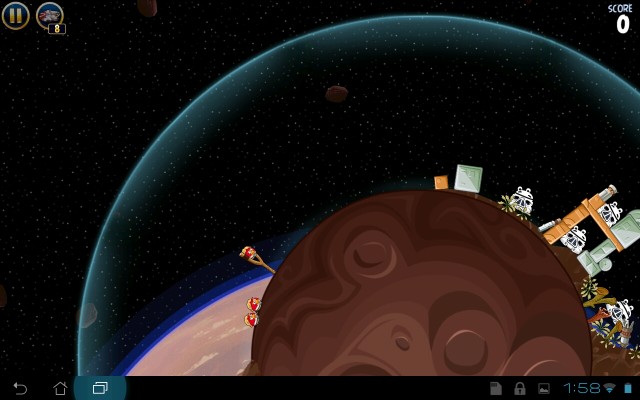 The graphics quality has been improved a whole lot from the first game, and the different scenery and backdrops are very unique and well stylized. For a 2D game like Angry Birds, Rovio have pushed the graphics content to the limit.