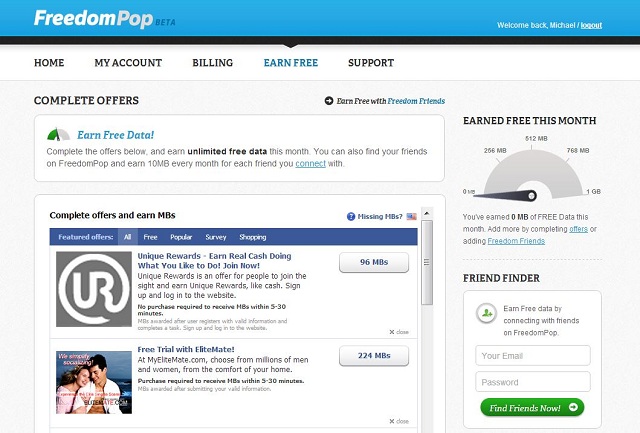 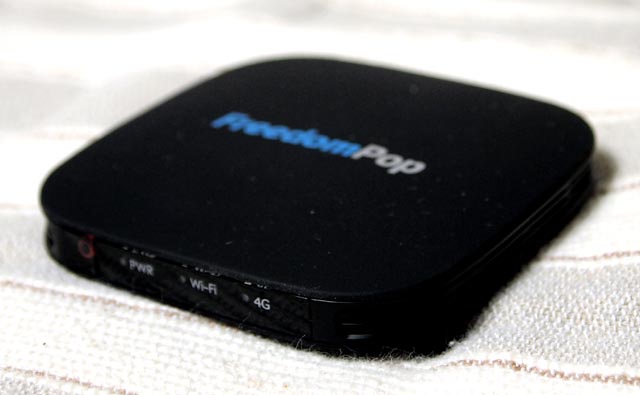 I live in Vancouver, but I travel down to the States not infrequently. Up until now, I’ve been maintaining a prepaid cell phone with AT&T so that I can avoid roaming charges with my main carrier back home. However, AT&T doesn’t let me add a data package to my GoPhone anymore unless I upgrade to a $25/month plan… which I’m not going to do. And so, I started to look for the most affordable ways to have mobile Internet while going to places like Seattle and Las Vegas.

And then I came across FreedomPop, which has only been in beta for the last little while. The kicker here is that I don’t have to pay a dime; FreedomPop gives out 4G wireless Internet for free, including providing you with a mobile hotspot. To give them a try, I ordered the FreedomPop Photon 4G mobile hotspot and here are my impressions.

Backed by Skype co-founder Niklas Zennstrom, FreedomPop aims to provide Americans with free Internet access. The “free” account is limited to just 500MB a month (you can pay for more), but it is free. All you have to do is get the USB dongle or the mobile hotspot, but both of those are free too; you just have to put down a (refundable) security deposit. On paper, this sounds better than the NetZero 4G offering which only provides 200MB/month for a first year and you have to buy a wireless device from them.

The FreedomPop Photon 4G mobile hotspot is exactly the same as the CLEAR Spot Voyager, except it has been re-branded. This is because FreedomPop is an MVNO that is currently utilizing the CLEAR WiMAX network. What this means is that while you get “4G WiMAX” speeds, coverage is not nearly as good as the majors. Thankfully, FreedomPop has signed a deal to use the Sprint LTE network and they should be rolling that out some time in 2013.

So, what about the Photon 4G itself. It’s actually a lot smaller than I expected, measuring about half the size of a modern smartphone at about 2.6″ x 2.6″ x 0.5″. There’s a 1830mAh battery inside that’s reportedly good for up to six hours of continuous use. It has a range of up to 100 feet and can connect with up to eight Wi-Fi devices simultaneously. 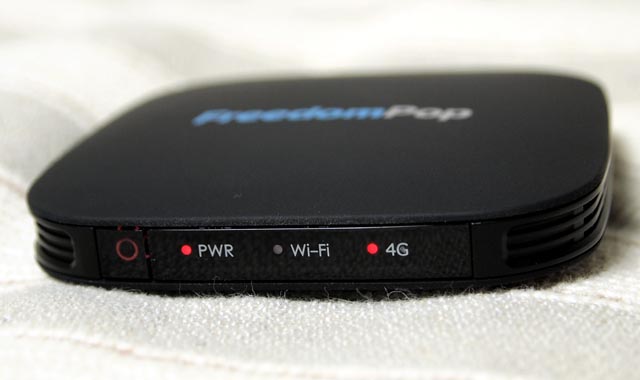 There are three indicator lights on the front: Power, Wi-Fi, and 4G. In case you ever forget what any of the colors mean, there is a handy guide printed on the back of the Photon. The power light, for instance, is solid green when the battery is close to full, changing to amber and finally red as it starts to drain. 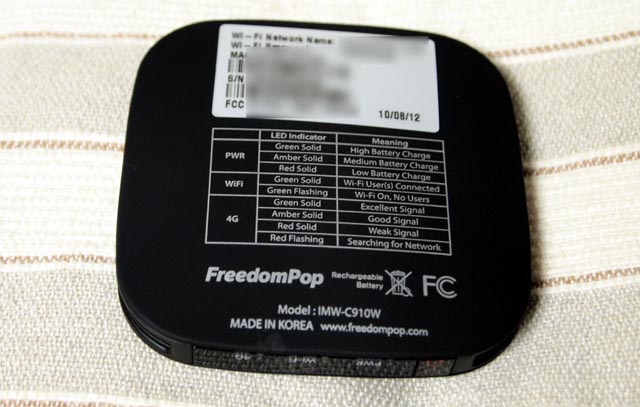 The setup process couldn’t be easier. Also printed on the back of the device is your default SSID and password. You turn on the Photon 4G by holding the power button, give it a minute to start up, and then connect to it with your smartphone, tablet, laptop or whatever other WiFi-enabled device the way you would connect to any access point. Assuming you have 4G signal, you are now connected to the web.

The Photon 4G acts more or less like a regular router, so after connecting to it, you can use your mobile browser and enter 192.168.1.1 to get to the mobile admin page. 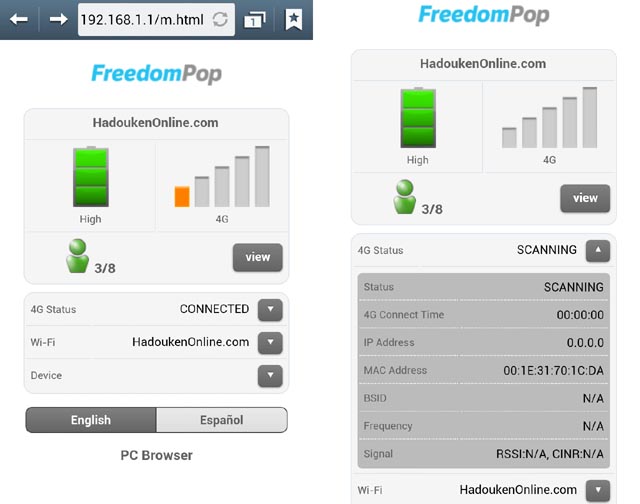 This is significantly stripped down from what you’d get from your wireless router at home, but you do have access to all the basics that you need. This includes monitoring the battery level and 4G signal, as well as easily changing the SSID and password (which you’ll probably want to do). Curiously, you cannot access your FreedomPop account from here to see how much data you have consumed. This can become troubling if you’re getting close to your quota and run the risk of overage fees.

So, how does this perform in the real world? It’s a bit of a mixed bag. I had previously borrowed my friend’s T-Mobile 4G hotspot and I had coverage just about everywhere I went. Speeds were generally very good too. FreedomPop is a little different.

My testing took me from Bellingham to the edge of Seattle in Washington state. I did not have any 4G signal between the US-Canada border and Bellingham, but I did pick up a signal when I got into town. It was mostly fine when I was outdoors or near a window, but the signal did begin to fade out when I got into the mall and it fell out entirely when I got into the concrete behemoth known as Costco. 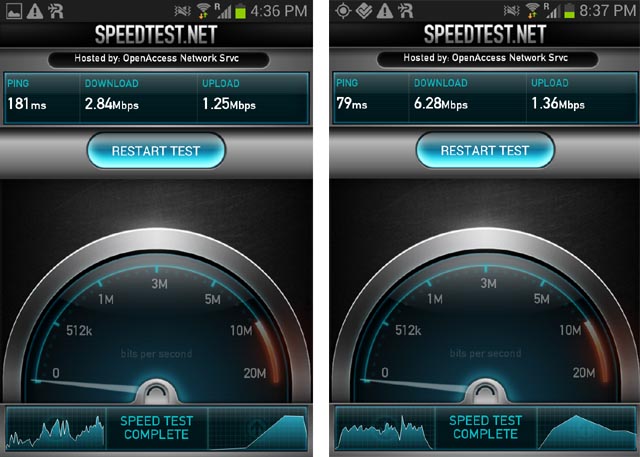 The speed test on the left was performed inside a store in a strip mall in Bellingham. It’s not exactly blazing, but if all you need is some mobile access to e-mail and Facebook, almost 3Mbps is more than adequate. The signal dropped out again as I hit the Interstate, coming back periodically but mostly falling out. It wasn’t until I got to Lynnwood (about 15 minutes north of Seattle) that I got a solid signal again. It was here that I performed the speed test on the right, which is much better at over 6Mbps down and with about half the ping time at 79ms.

I can’t say for certain what the coverage and the speed will be like in your area, but based on my experience, the CLEAR WiMAX network is really only useful when you’re in bigger cities and it’s barely usable in smaller towns. It also has a hard time penetrating dense foliage or buildings and this is likely due the 2500MHz band that it utilizes. It’s good to have some free Internet, but it’s not nearly as reliable as what I was able to get with T-Mobile or AT&T. 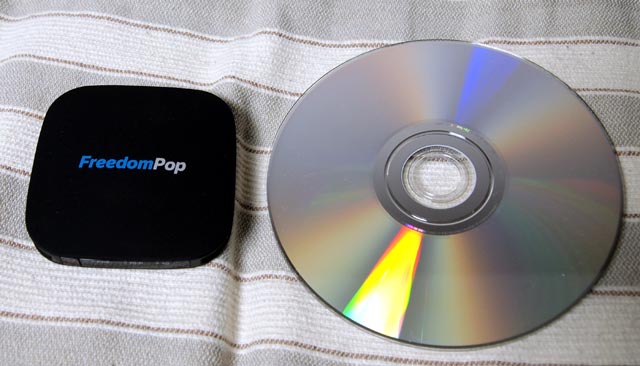 Given the price, I suppose I can’t really complain. All I had to do was put down the $100 security deposit and I had a “free” 4G mobile hotspot in my hands. When I was able to get a solid WiMAX signal, the resulting speeds are perfectly adequate for casual use, but it’s getting that solid signal that is such a challenge. I imagine performance with the USB dongle or the iPod touch sleeve would be much the same.

Battery life was pretty close to the claimed six hours, though I wasn’t actively using the connection the whole time. Of course, the Photon was constantly hunting for a 4G signal too. Build quality is good–it has this nice soft finish–and it really couldn’t be any easier to use. I think that FreedomPop is really onto something here, but it just won’t do with the CLEAR WiMAX network. I look forward to what Sprint’s LTE network can bring, but until then, I would not recommend relying on the FreedomPop 4G as your primary mobile Internet service. 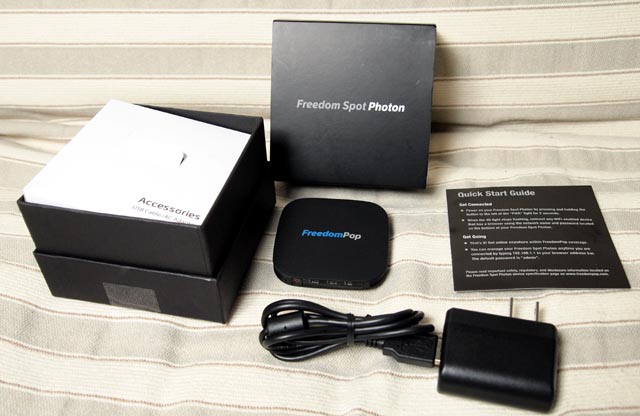 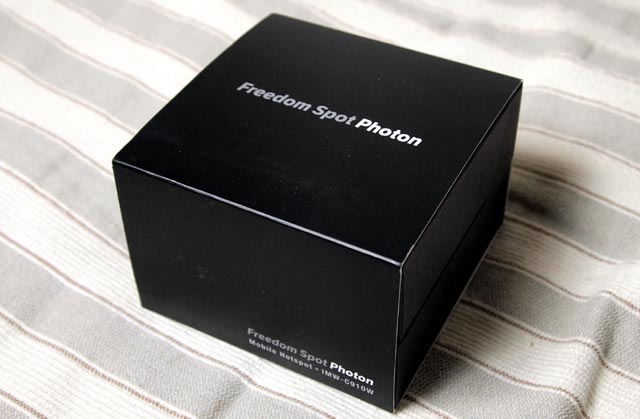 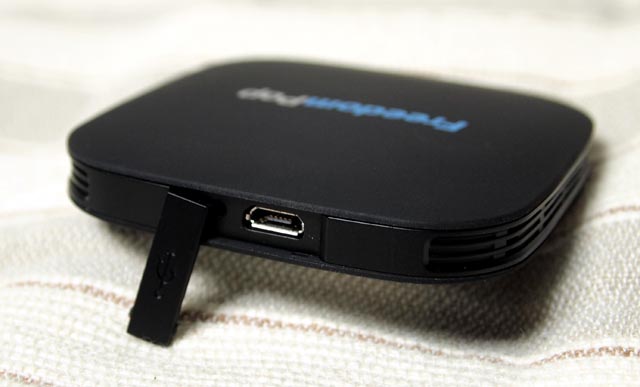